This Xbox Series S Bundle Is Only $260 Right Now

The Xbox Series S is already a great, affordable option for players looking to pick up a new-gen console, and right now you can snag one for a better price than usual. Over on eBay, Antonline is offering an Xbox Series S bundle that includes some digital goodies for Fortnite and Rocket League along with a copy of Watch Dogs Legion for just $260, down from $360. 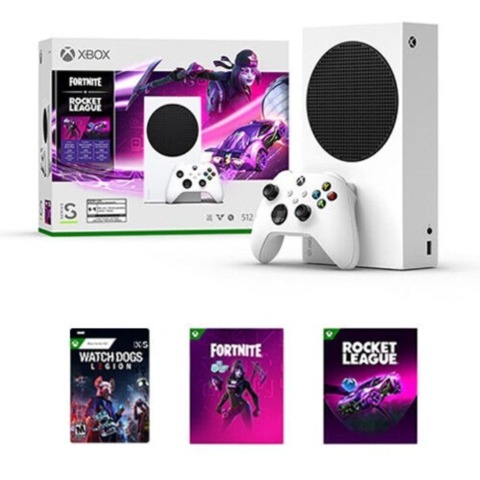 Considering a standalone Xbox Series S typically retails for $300, you’re already saving money with this deal. But throw in 1,000 V-Bucks, 1,000 Rocket League credits, and Watch Dogs Legion, and this becomes an impressive way to kick off your new-gen gaming career. Your purchase also comes with a wireless Xbox controller. We’re not sure how long inventory will last, as a limited quantity is available, and more than 20 have already sold in the past 24 hours.

The deal is being offered through eBay by Antonline. The company is a Microsoft Authorized seller, so you can rest easy knowing you’re buying from a trusted source. Your purchase also comes with free four-day shipping and includes a 30-day return policy (which is also covered by Antonline).

The Xbox Series S might not be the graphical powerhouse that is the Xbox Series X, but it’s still a huge step up from Xbox One and gives you access to all the same games. So if you’ve been looking for an affordable way to make the new-gen leap, be sure to give this deal a closer look. A similar promotion is also running directly through Antonline, and it might be worth checking the catalog if this eBay deal goes out of stock.

As a digital-only console, it makes sense to pair the Xbox Series S with an Xbox Game Pass Ultimate membership. Right now, you can get a three-month subscription for $32 at eBay (down from $45).