The next entries in the Pokemon series are right around the corner, and thanks to August 2’s Pokemon Presents, we now have an even better understanding of just what we can expect from them. With a new region, Pokemon, characters, mechanics, and a non-linear, branching story, there’s a lot to be excited about in Pokemon Scarlet and Violet, so here’s a round up to (hopefully) get you just pumped as I am. 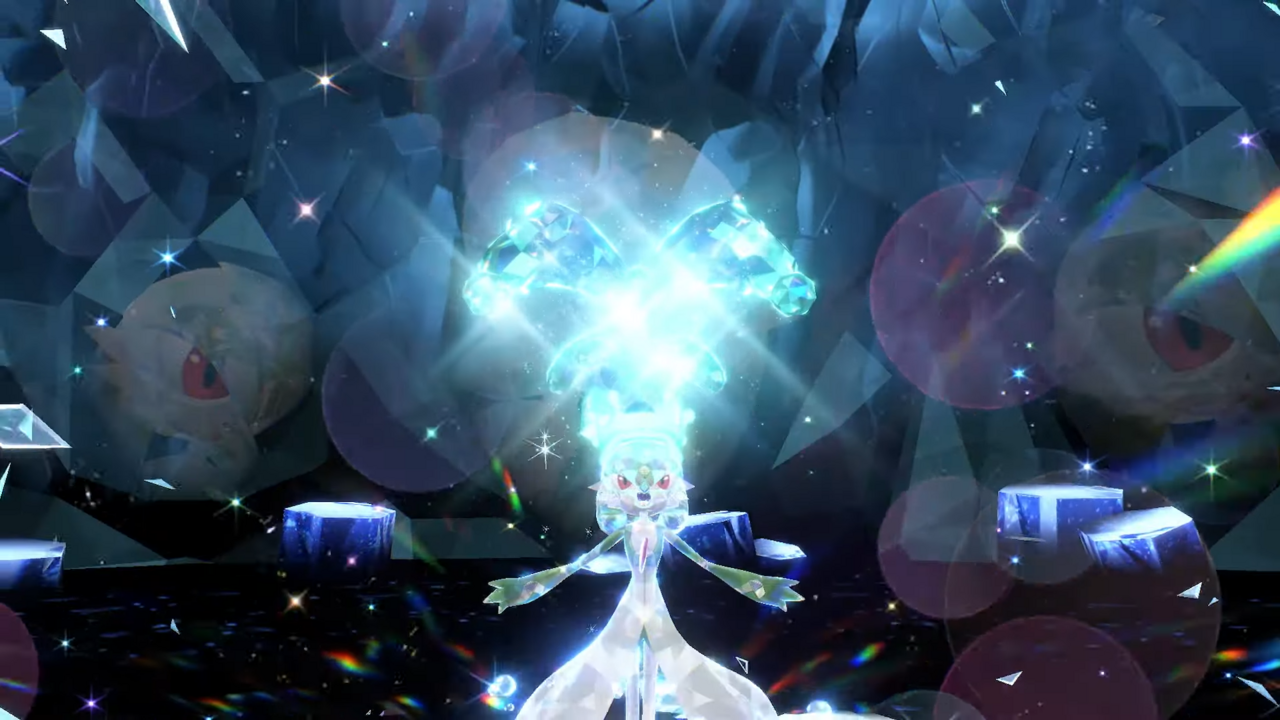 Alright, let’s hit the more serious stuff before this devolves into me gushing about Mr. Jacq and Sprigatito. Just about every Pokemon game has its own unique gimmick, and Scarlet and Violet is no exception. The newest feature coming to the series is Terastallization, or the process of Pokemon transforming into crystalized versions of themselves with enhanced abilities and even new types. In addition to being mostly cool-looking, Terastal Pokemon add a unique element to battles in that they change what Pokemon are effective against one another. Safe to say, this ability could come in clutch in dicey situations. 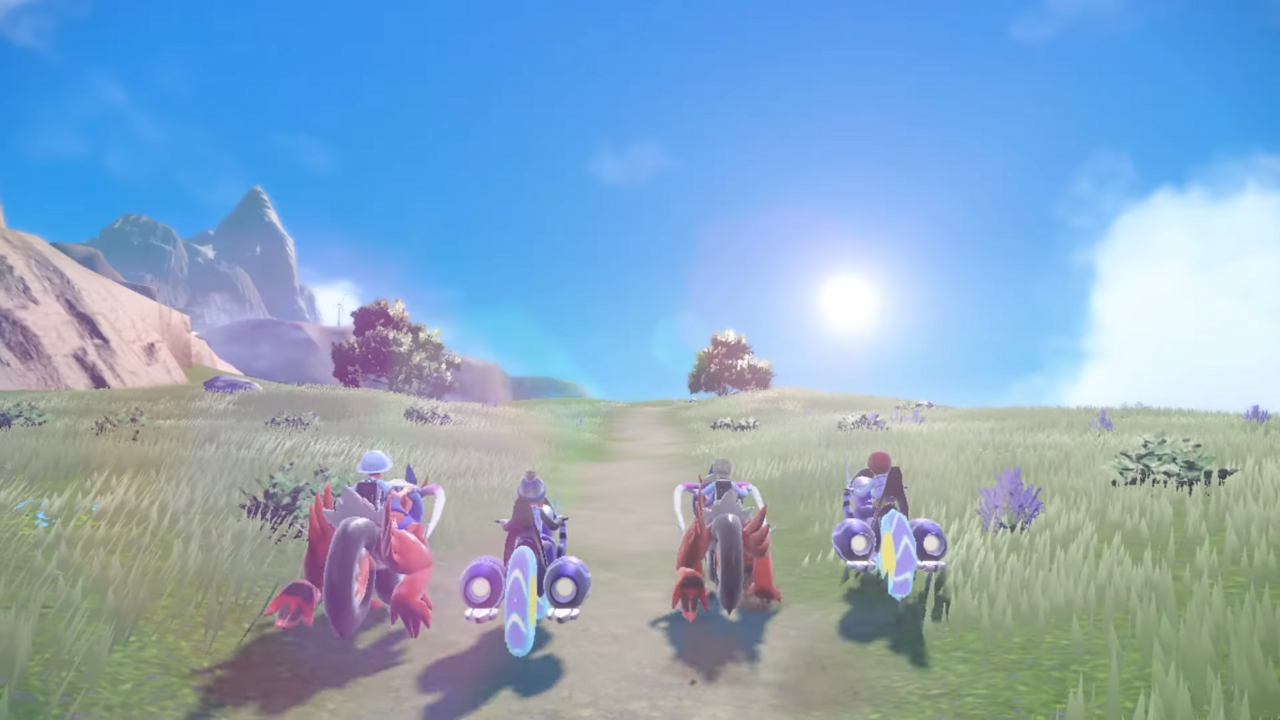 Pokemon Scarlet and Violet follow your student-turned-Pokemon trainer as they embark on a school-mandated “treasure hunt,” though what exactly that treasure is has not been specified (my money is on “the friends along the way”). Once the hunt has begun, however, they are free to follow three different story campaigns in whatever order they so choose. While one of these stories is your typical “defeat all eight gym leaders and become the Pokemon champion” plotline we all know and love, the other two journeys are yet to be revealed. Additionally, those eight gym leaders can now be beaten in any order. Many people have suspected Pokemon games would get progressively more open-world, and it appears that’s exactly what’s happening. 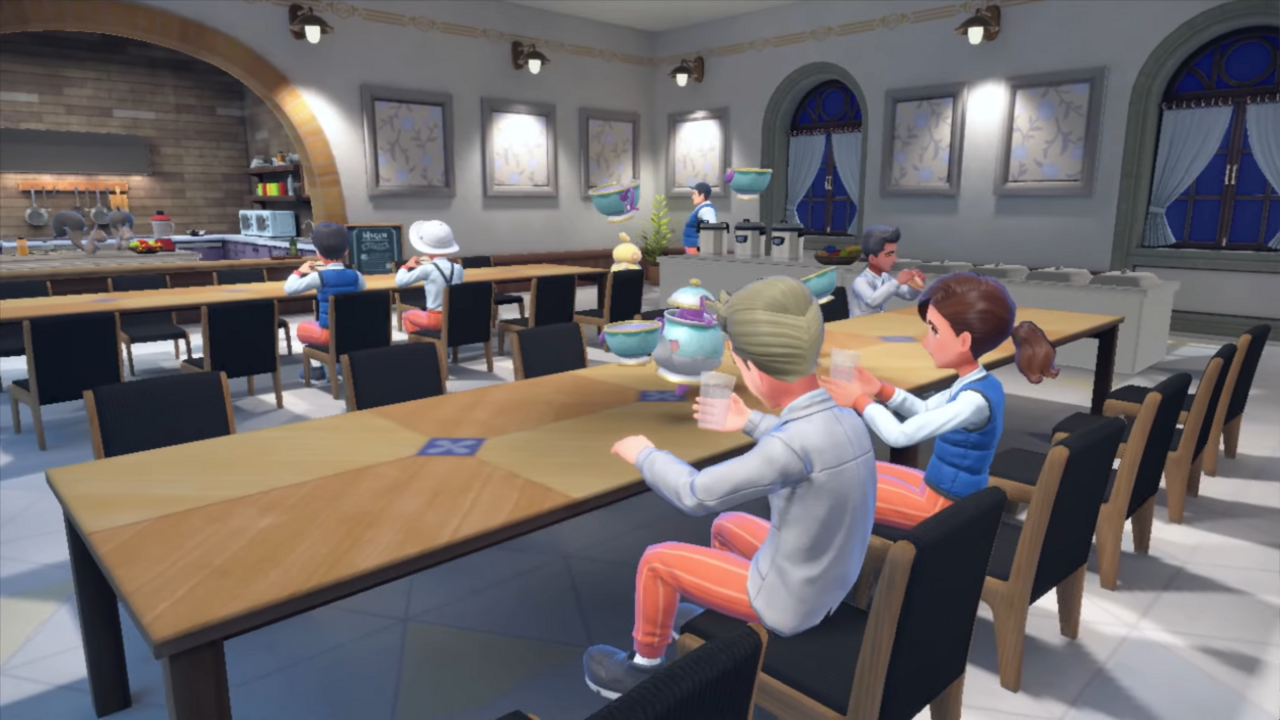 Students sit in the school cafeteria being served tea from Polteagiest

In general, the setting of Scarlet and Violet looks inspired, but I am particularly a fan of Game Freak’s decision to make your sort of “hub” a school. Though not everyone is a fan of the uniforms (fingers crossed we’ll still get clothing options as robust as Sword and Shield’s choices), I think the student element makes a lot of sense narratively, and helps flesh out the wonderful world of Pokemon.

This still of Sprigatito 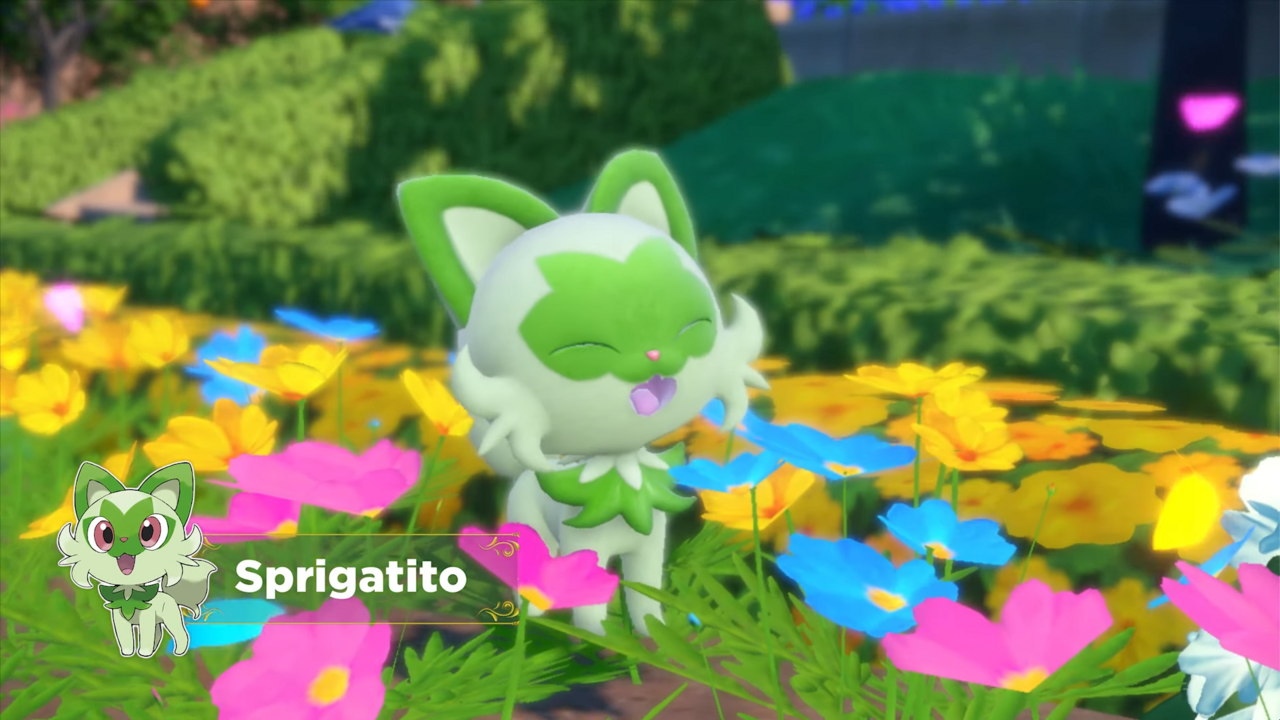 Sprigatito smiling in a field of flowers.

Yes, I am a tattooed, astrology-loving bisexual woman on the internet. Yes, I adore cats. And yes, I will be choosing Sprigatito as my starter. However, even though I made my choice the second I saw the Paldean region starters, this image single-handedly made me certain my choice was the best one. Don’t get me wrong, Fuecoco and Quaxly are adorable and I respect those who choose them instead, but I would lay down my life for this lil’ baby. Just look at him. Wow. 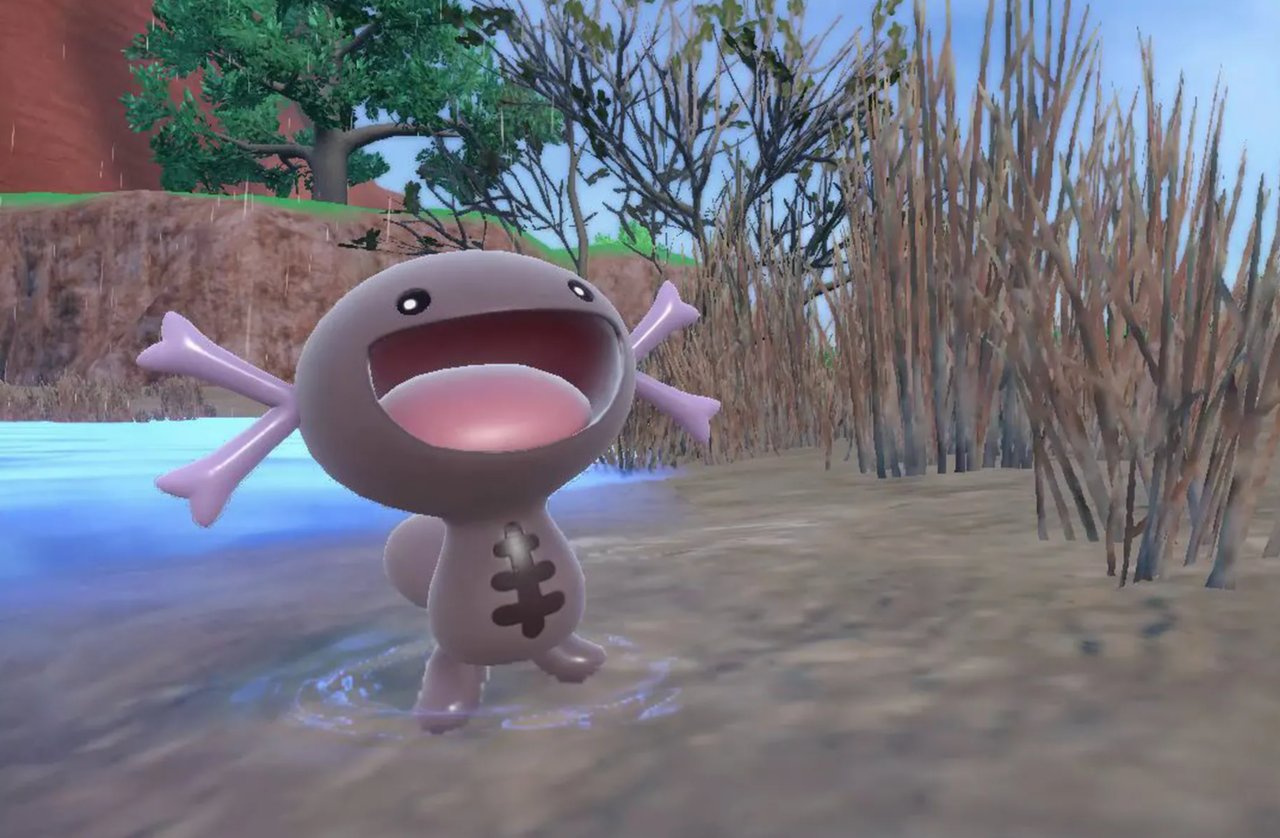 This might very well be another example of us never really knowing exactly what the internet is going to find themselves utterly attached to when new game footage is revealed. Pokemon fan art of Paldean Wooper is already taking off, with many affectionately calling the lil’ guy um… pooper.

Personally, I think they’re reminiscent of America’s favorite (only?) malted milk balls, Whoppers, but to each their own. Either way, he’s looking to be a real star of the show, and I’m excited to see what Paldean Quagsire will ultimately look like.

All-terrain motorcycles that are also Pokemon? 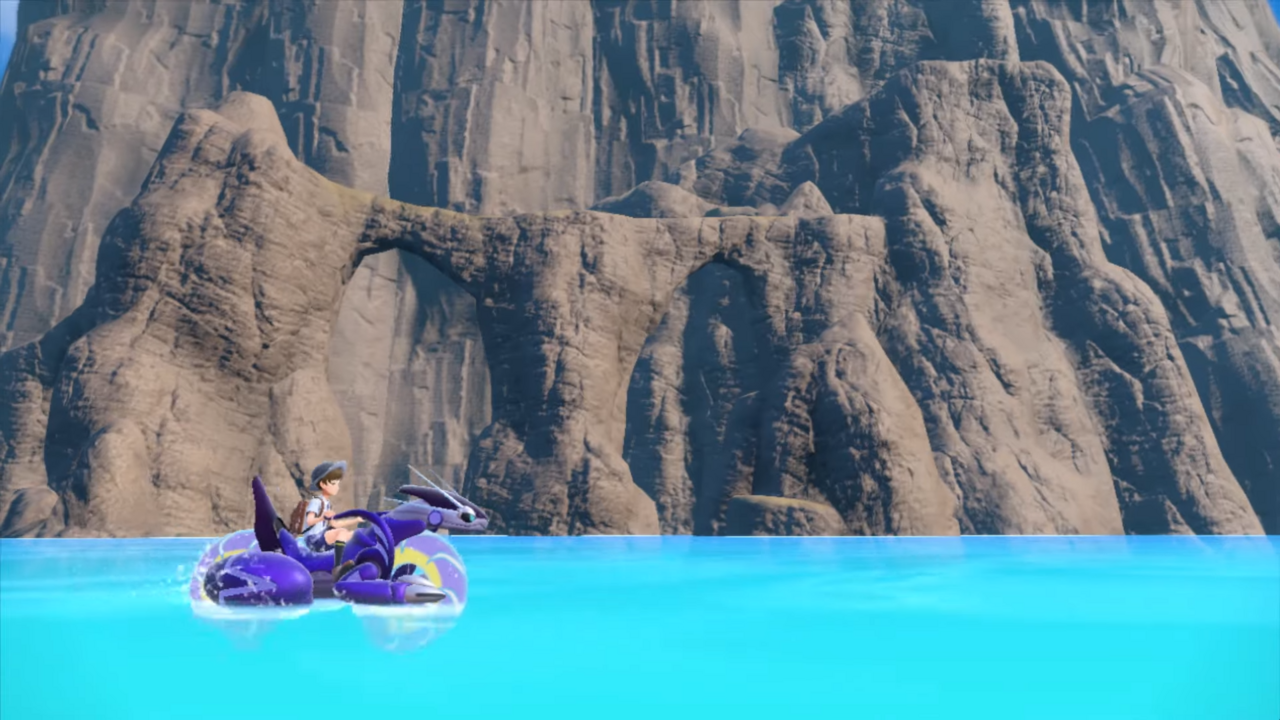 A Pokemon trainer rides Miraidon past an ocean cove.

Move over, Rotom–there are two new utility Pokemon in town. Turns out, Pokemon Scarlet and Violet’s legendaries, Koraidon and Miraidon, are legendary for a reason: They double as all-terrain vehicles. I still am not sure exactly how I feel about their ability to transform into wheeled vehicles that can traverse land and sea, scale mountains, and fly through the air, but it is both a unique and convenient feature. Plus, with Scarlet and Violet’s four-person co-op enabled, you can also use them to race your friends, adding a whole new element of fun to the series. 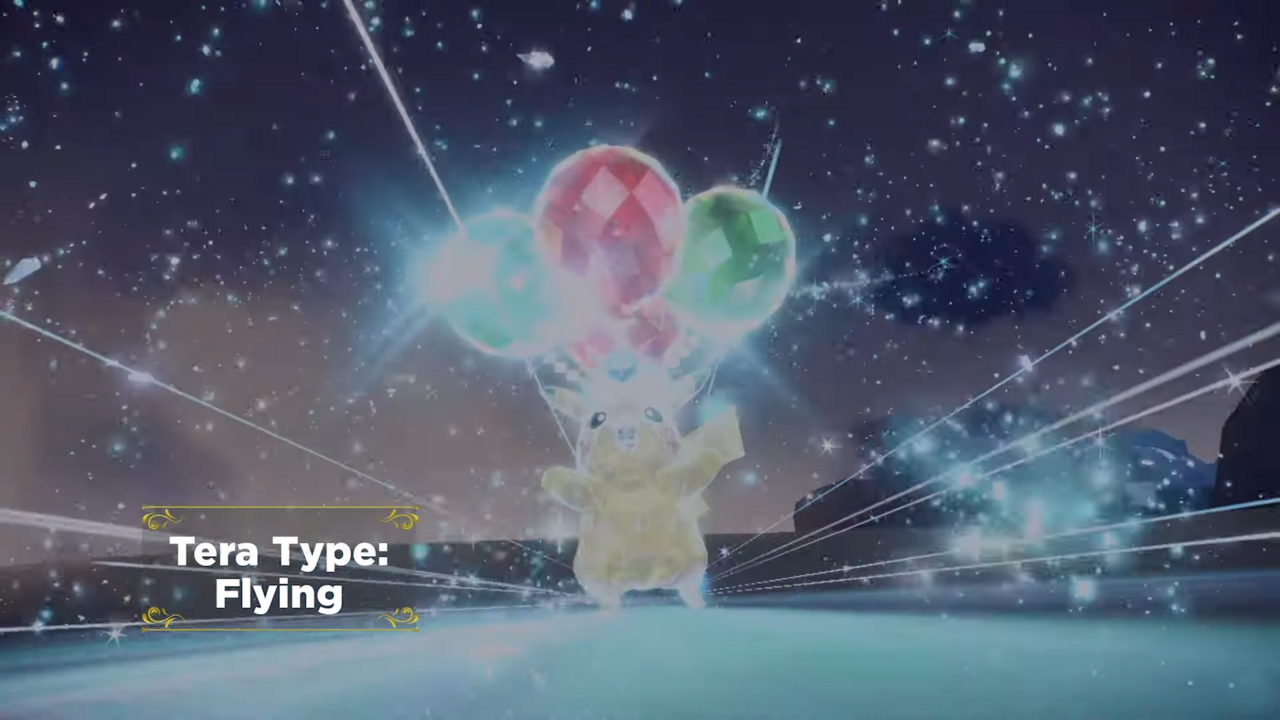 A crystalized Pikachu with balloons tied to its torso.

When I was a young girl, I had all my Pokemon and Yugioh cards stolen–and it was devastating. However, even though I had much rarer cards–including a lot of cool French and Japanese cards I had acquired through travel–the one I most sorely missed was my Flying Pikachu card. That said, I am so excited to be able to catch and train him in Pokemon Scarlet and Violet. Additionally, his new Tera Type gives him an incredible advantage in battles. While ground-type Pokemon might annihilate electric-types, they’re weak to flying, giving him a hidden edge. 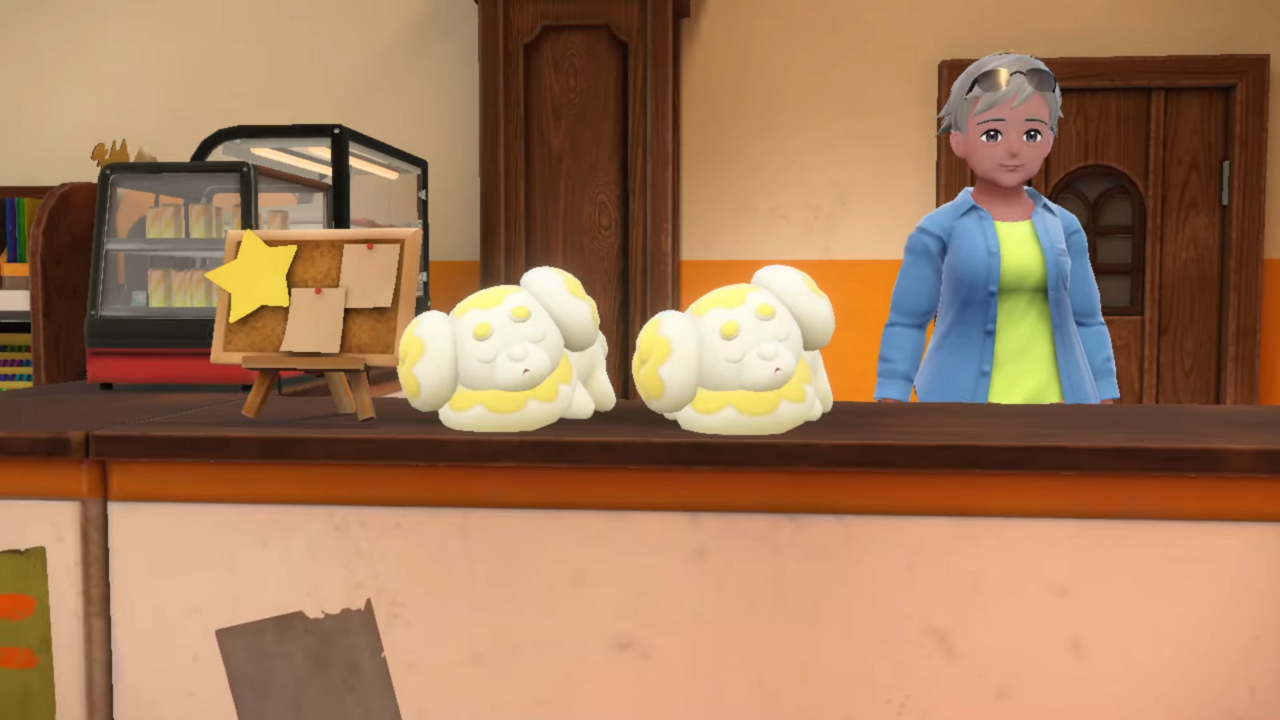 Pokemon used to be simple. Game Freak used to spell “snake” backwards, paint a serpent purple, and call it a day. Now we have chandeliers, trash piles, ice cream, and more–and I think we’re better for it. The newest strange Pokemon to join the mix is Fidough, a fairy-type Pokemon that is dog-shaped and made of bread. As a lover of dogs, carbs, and those teddy bear-shaped loaves of bread you can buy in San Francisco, I adore this pup. I want him as a baking buddy and loyal companion. And bonus: There are also plenty of clever options for variants and evolutions, fan art of which is already circling Twitter and Reddit. Will they go with Purebread? Doughmutt? The puns–and cuteness–never end.

Guess you can say it's… Pure Bread pic.twitter.com/U1n0Kca3Jm 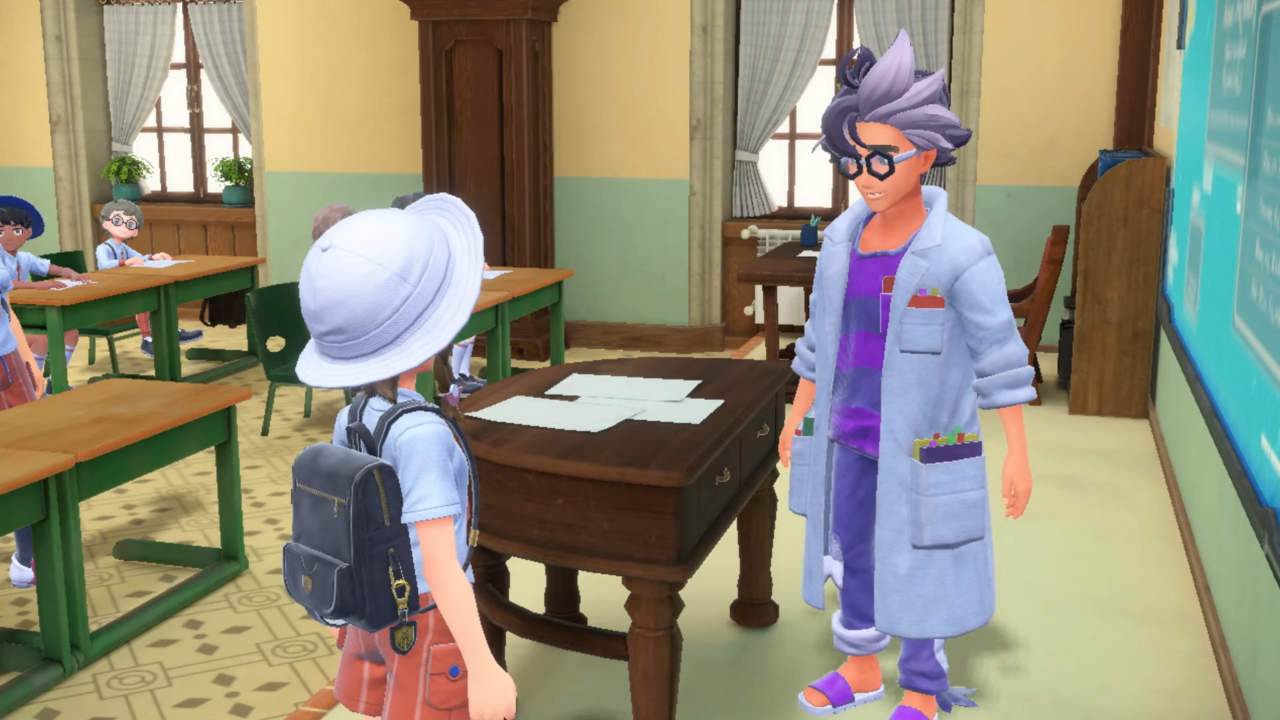 A Pokemon trainer visiting their scruffy teacher, Mr. Jacq, in his classroom.

To quote one of my all-time favorite TikTok sounds, “Capitalism really popped off today.” All the character designs in Pokemon Scarlet and Violet are great and kinda thirst-worthy. I mean, just look at this scruffy teacher aka Mr. Jacq. And don’t even get me started on Garcha and Professors Sada and Turo. But thirst aside, there’s also seems to be an assortment interesting of classmates to simply hang out with–such as Arven, Nemona, and Penny–and a whole lot of other cool characters to battle and befriend.

Pokemon Go Is Holding New Bug Out Events In August »