Splatoon 3 Is Bursting With Things To Do

Variety isn’t necessarily the first word that comes to mind with the Splatoon series, but it certainly will be a key element of Splatoon 3. With two games and a large-scale expansion under its belt, the latest in Nintendo’s kid-friendly shooter franchise builds on everything that came before. That means a game that’s loaded for bear–more game modes, weapons, maps, customization features, and more. Having tried three of the modes at a preview event, the game looks robust, while remaining very recognizable for Splatoon fans.

At a hands-on event, I tried three distinct modes that show the breadth of the content offerings in Splatoon 3: the single-player Return of the Mammalians campaign, the cooperative wave-based Salmon Run, and the traditional competitive Turf War battles. And although each relies on the same basic mechanics, playing them all back-to-back in quick succession showed how ingenious and flexible those mechanics are to support very different experiences.

Return of the Mammalians is the third installment of the ongoing Splatoon campaign series, a weirdly colorful post-apocalypse that has long implied that the Squid Kids and Octolings emerged post-humanity. This one focuses on the fuzzy Mammalians, including fuzzy hazards that can trap you temporarily. The name seems to imply this could answer some of our questions about what happened to humanity, but the handful of early stages I tried didn’t venture into that territory.

Instead, Return of the Mammalians was a good warmup activity, letting me get a hang of the weapons and movement again after being away from Splatoon. Like the other two games’ single-player modes, it serves as both tutorial and standalone adventure, centering itself less on combat than the multiplayer modes and more on environmental puzzles. None of these felt terribly challenging, but it was a good opportunity to get my sea legs. And it isn’t afraid to throw you curveballs, like the time I dispatched several self-destructive bomb creatures and then rounded a corner to find myself face-to-snout with a massive version that refused to go down to weapon fire, making me run for cover.

The single-player mode was also a good chance to try one of the new weapons: the Stringer bow. Though a bow might seem straightforward enough, the Splatoon take on the weapon adds versatility that takes some finesse to master (which is not to say that I did). You can squeeze off standard bow bolts quickly, but holding down the tension lets you toggle between two additional functions: a powerful focused shot and an explosive shot. Mapping these functions to the length of your drawback is sure to raise the skill ceiling for high-level play.

Next up was Salmon Run, the cooperative horde multiplayer where four Squid Kids fight off Salmonids while gathering their eggs and tossing them into a centralized bucket in a small arena setting. In Splatoon 3, Salmon Run will be available all the time, instead of only during special limited-time events. Nintendo has noted that there will still be special Salmon Run events that occur on a regular schedule, but you can dive into a match and fend off some angry fish anytime you want.

And those fish can get very angry. For the sake of comparison, we played two rounds of Salmon Run to experiment with different difficulty levels, with the modifier set at 5% and then 15%. Though we finished both rounds handily, absolutely fileting those fish, the difference between the two was stark. The 5% modifier was a relative walk in the park–or swim in the pond–while even the 15% difficulty made for some harrowing moments where taking down the deluge of enemies was like swimming upstream, with more enemies and more frequent boss appearances. It was easy to see how this will create longevity, with plenty of room for elite squids to challenge ever-more aggressive salmonids.

Finally, we tried three rounds of Turf War, the traditional competitive multiplayer that Splatoon has always been built around. We had free reign to experiment with different weapon types, and the sheer volume was a little overwhelming. This was every weapon I remember from Splatoon history, and some I’m sure I’ve forgotten. For the first round, I tried the other new addition, the Splatana, a sword styled like a windshield wiper that can also do a short-range burst if you charge ahead of time.

Suffice to say, I am far from a Splatana samurai. Perhaps a live competitive event isn’t the place to try a brand-new weapon, but I found the Splatana hard to utilize effectively. I did get an occasional kill by sneaking up on opponents to close the gap, but its charge shot was no match at distance against weapons built for range–which is almost every other weapon in Splatoon. So when it came time to swap weapons before the next round, I hastily put down the Splatana and went for a more traditional splat gun.

That embarrassing spectacle aside, Turf War is just as enjoyably chaotic as ever. It’s easy to forget how brilliant the core competitive gameplay of Splatoon really is. Your weapons are offensive but combat is incidental, as the true goal is to cover as much of the battlefield as possible with ooey-gooey neon paint with a beautiful wet sheen. That, in turn, lets you travel quickly in swim mode to reach a hot zone, escape from an enemy encounter, or sneak up on opponents. It’s just such a beautiful self-sustaining loop of systems. None of this is new to Splatoon 3–this is how the series has always worked–but I think it’s worth taking a step back to appreciate how harmonious it still is. 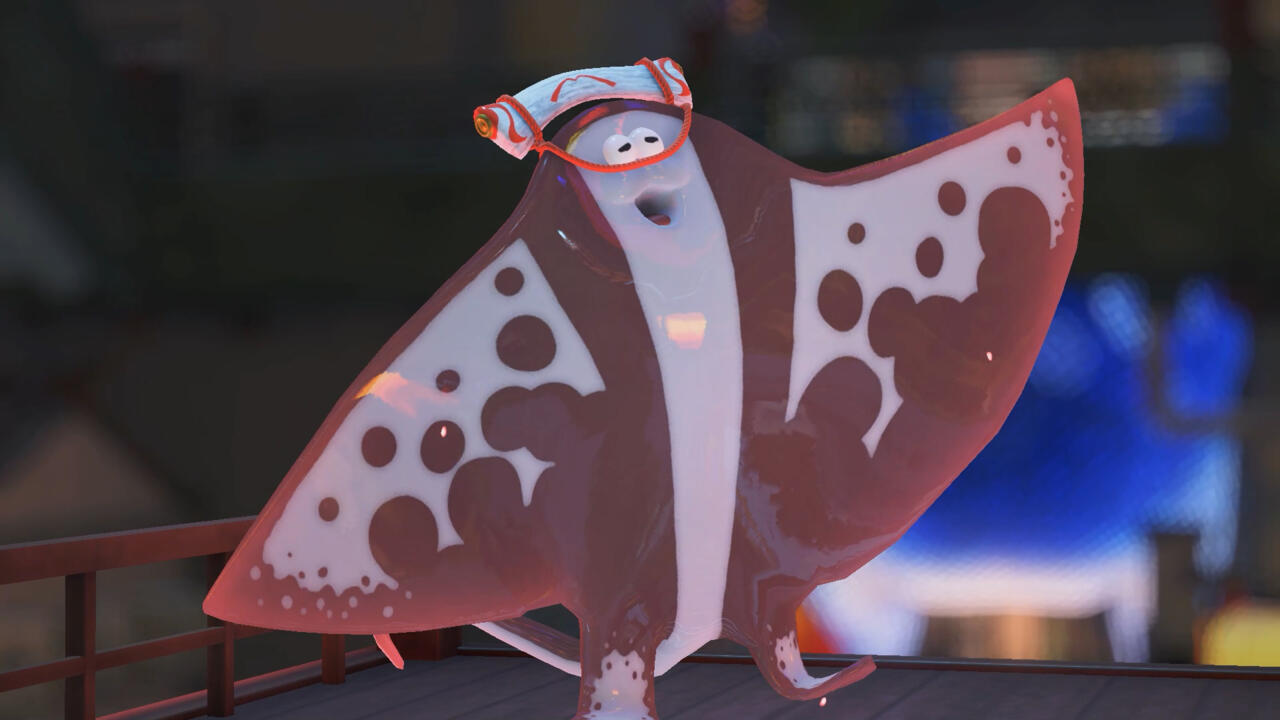 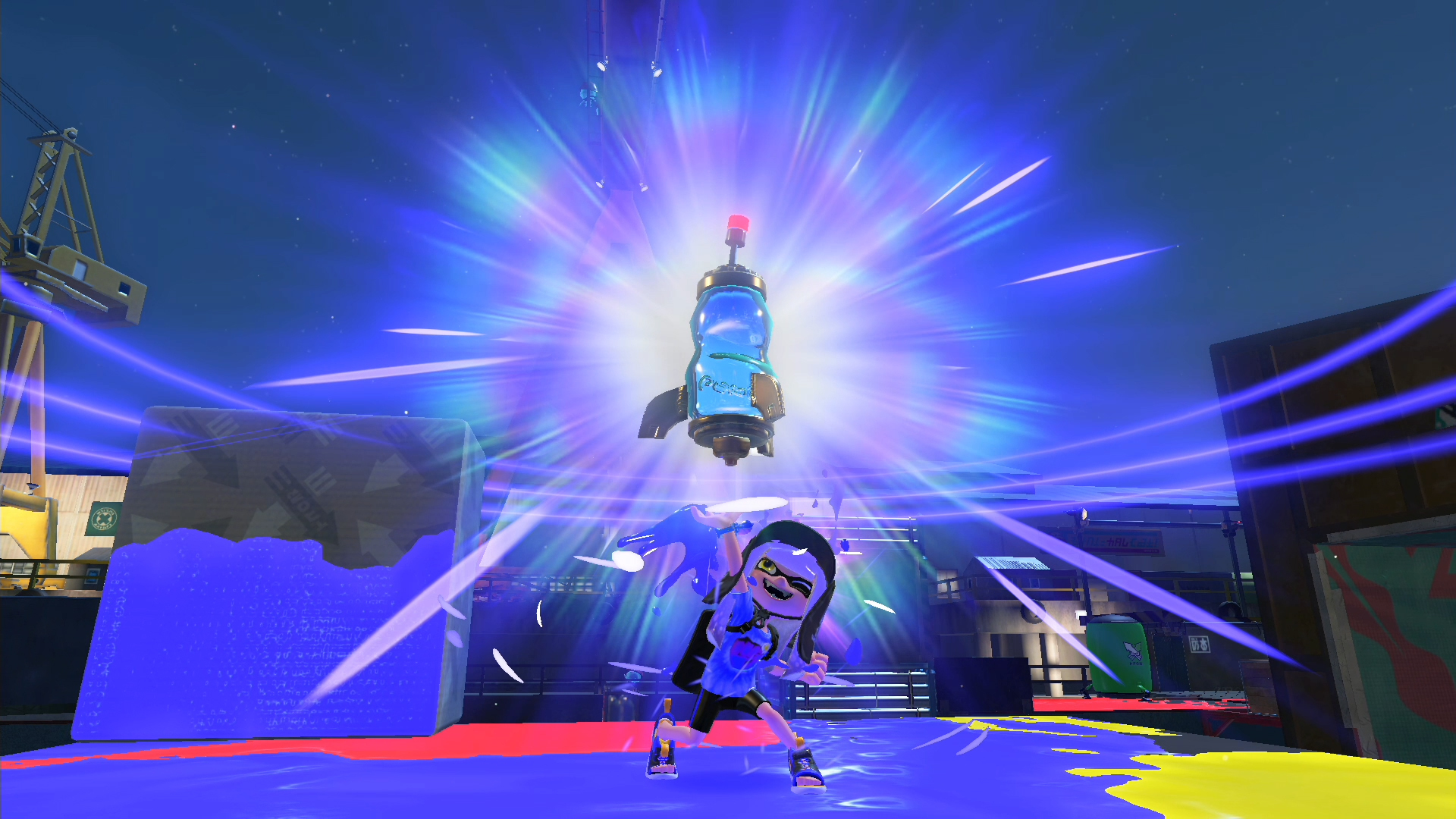 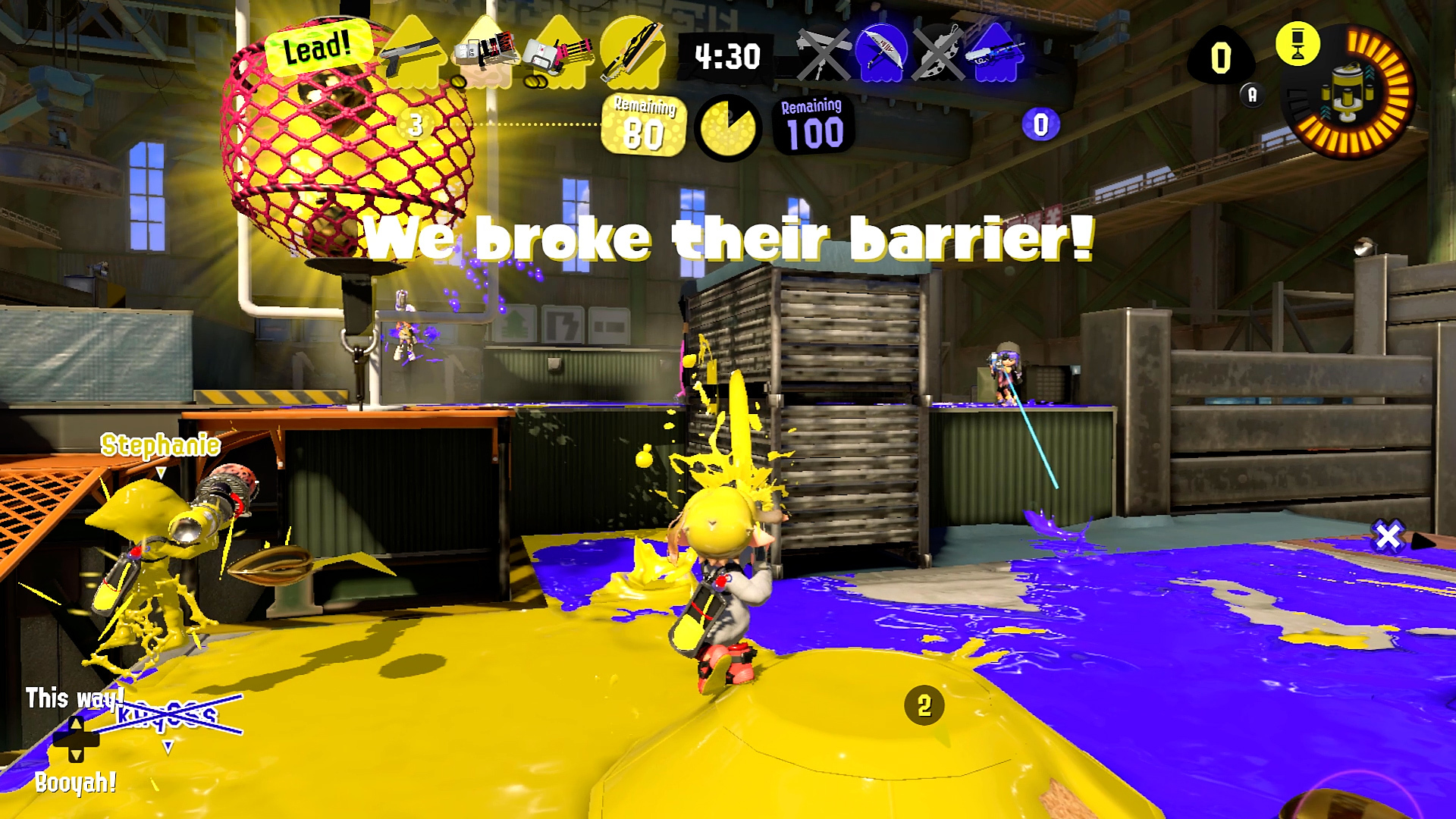 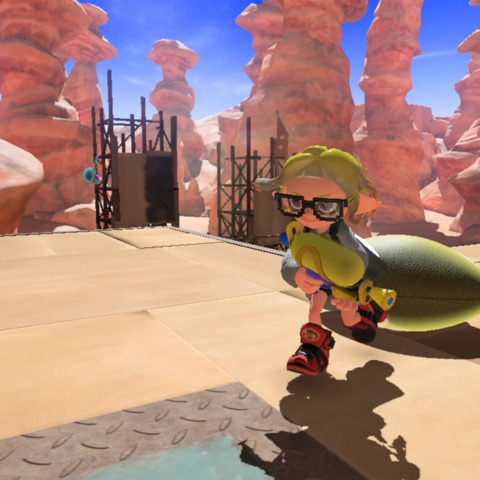 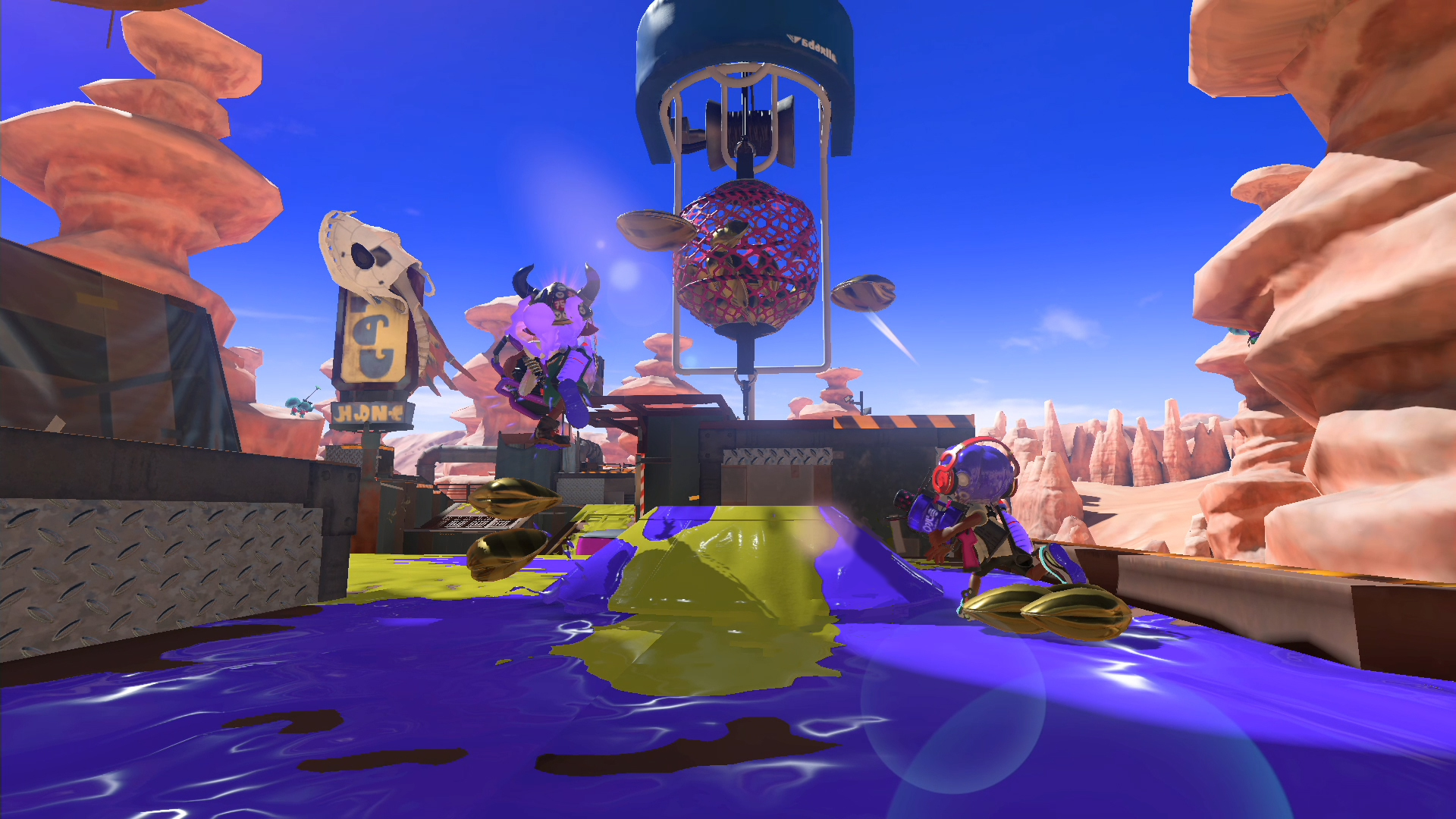 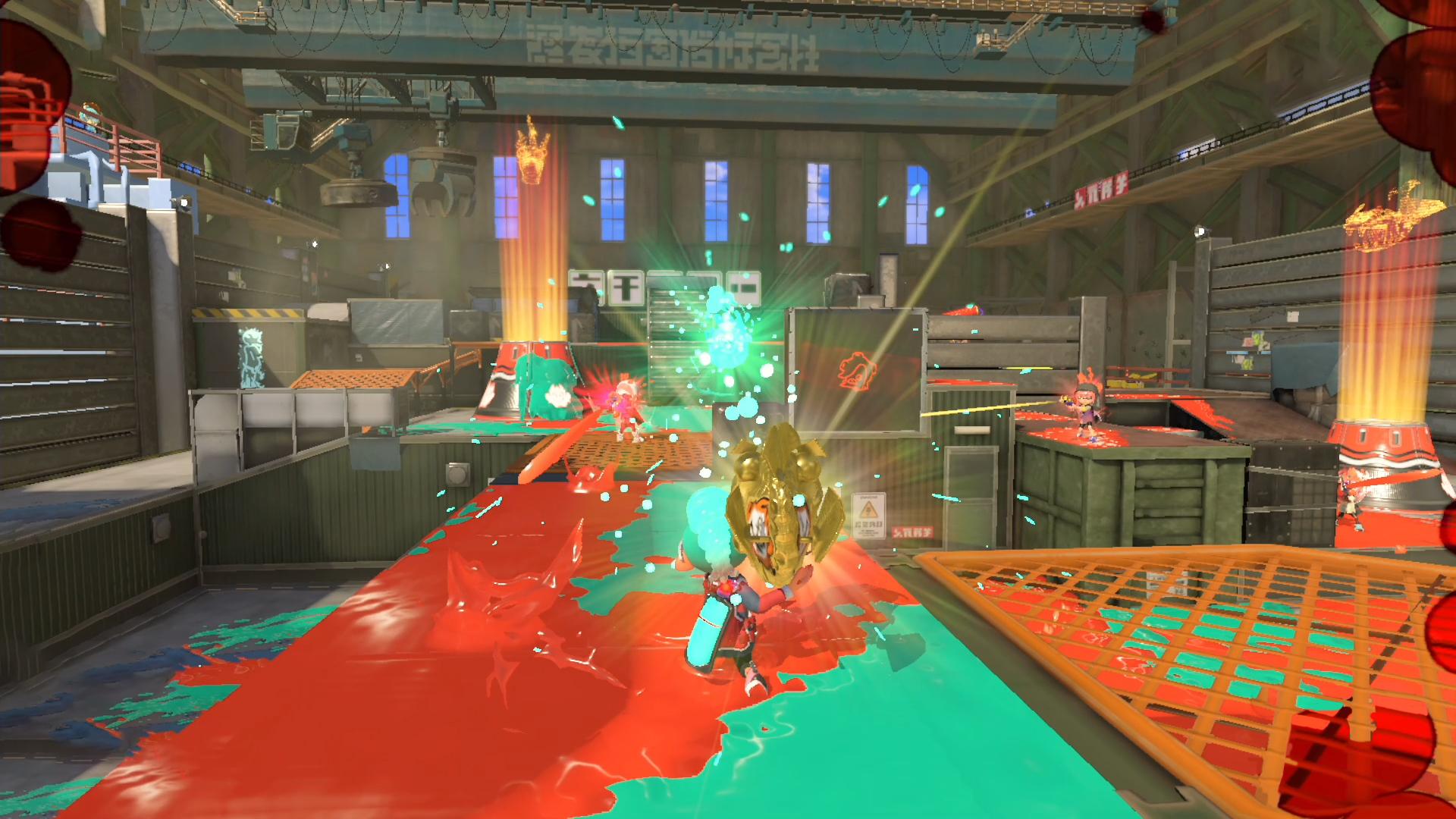 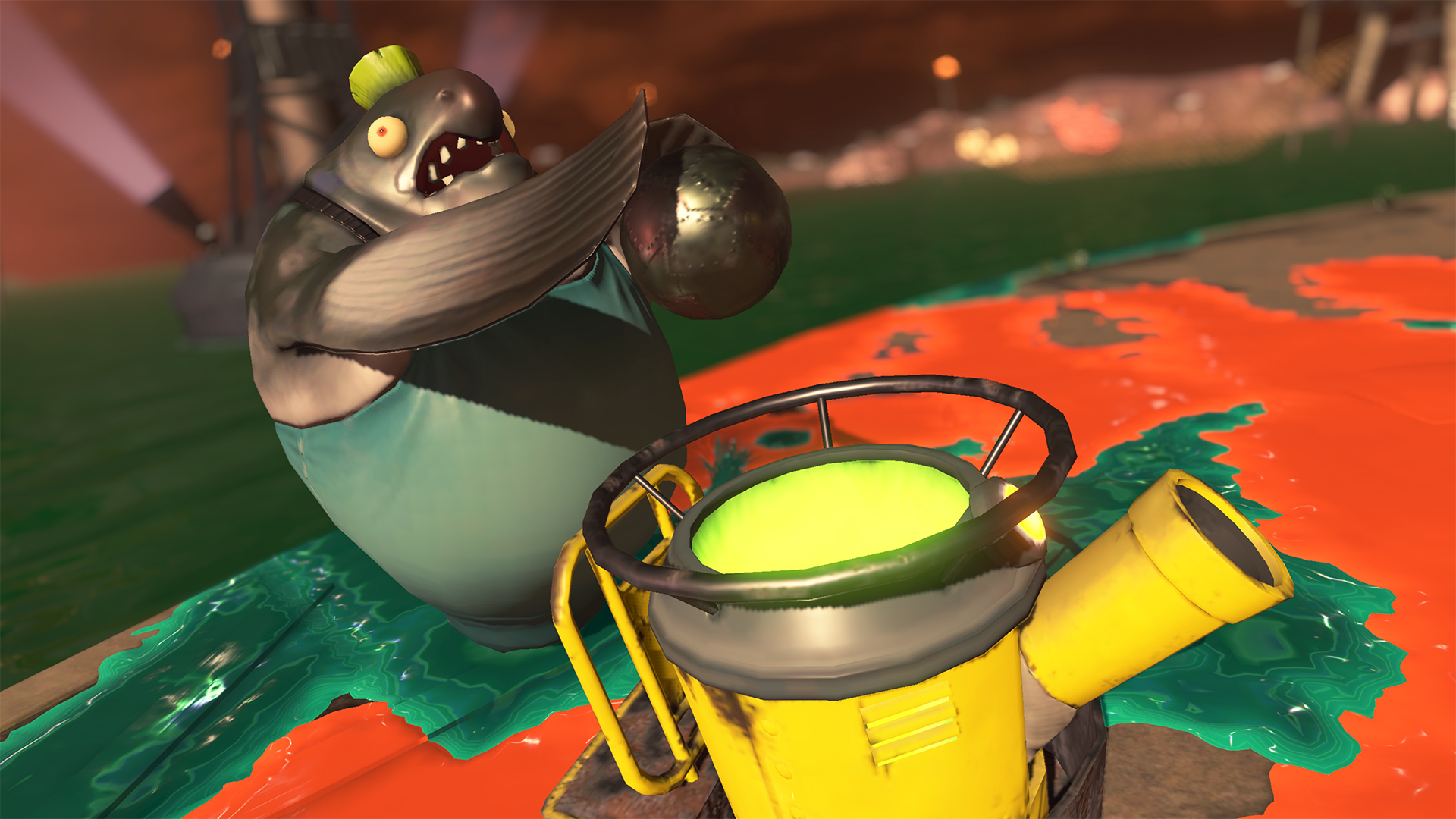 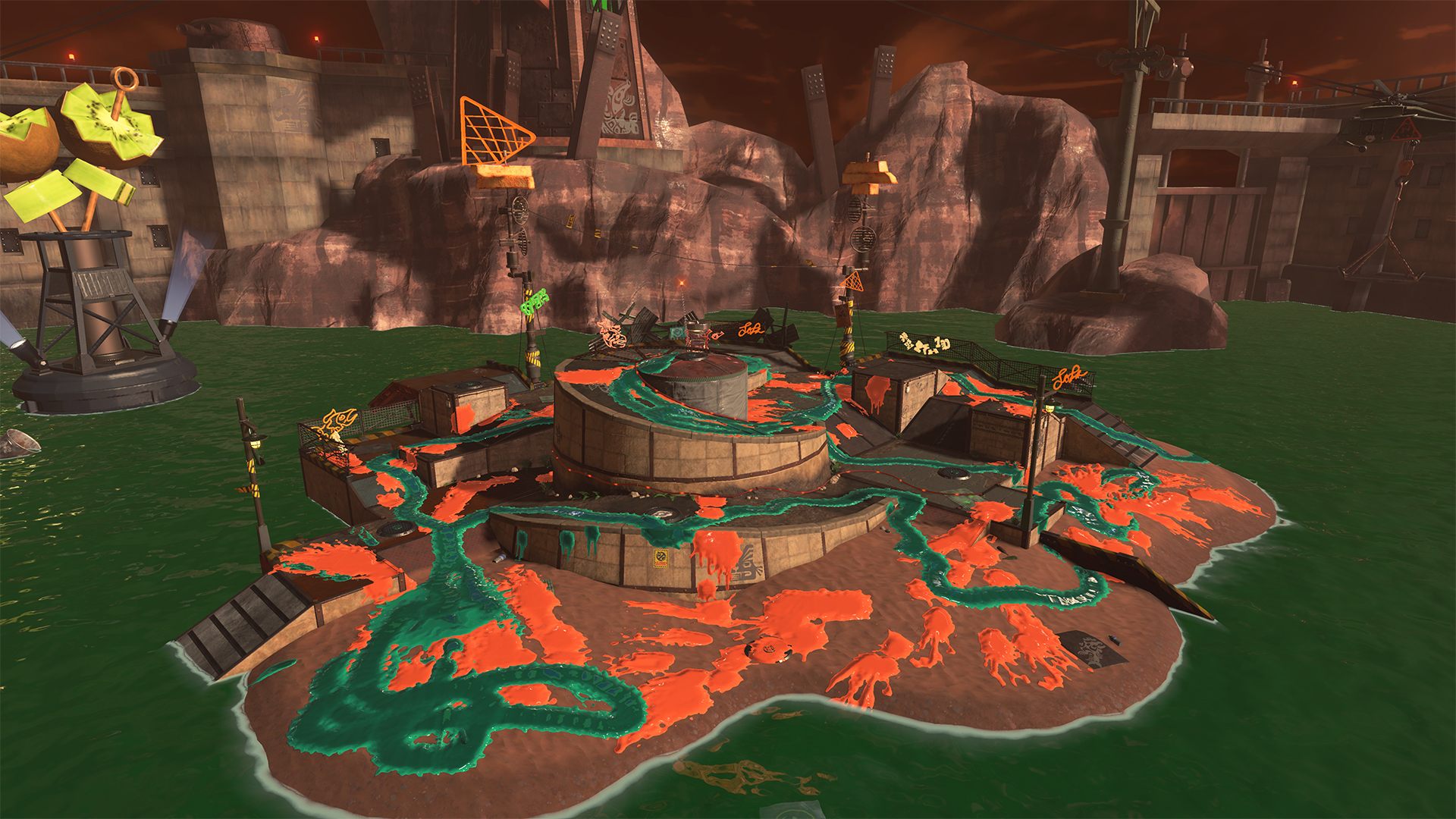 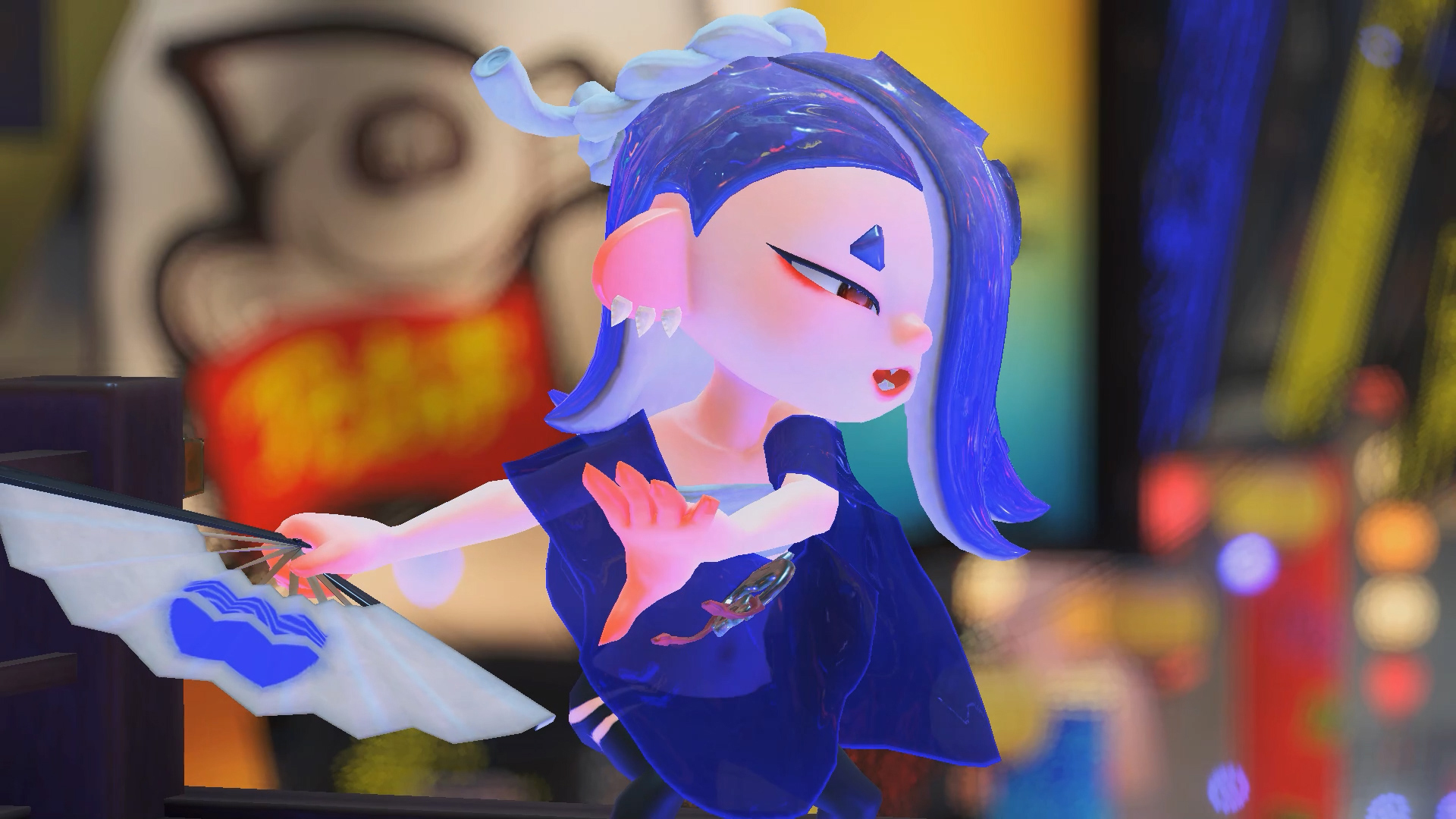 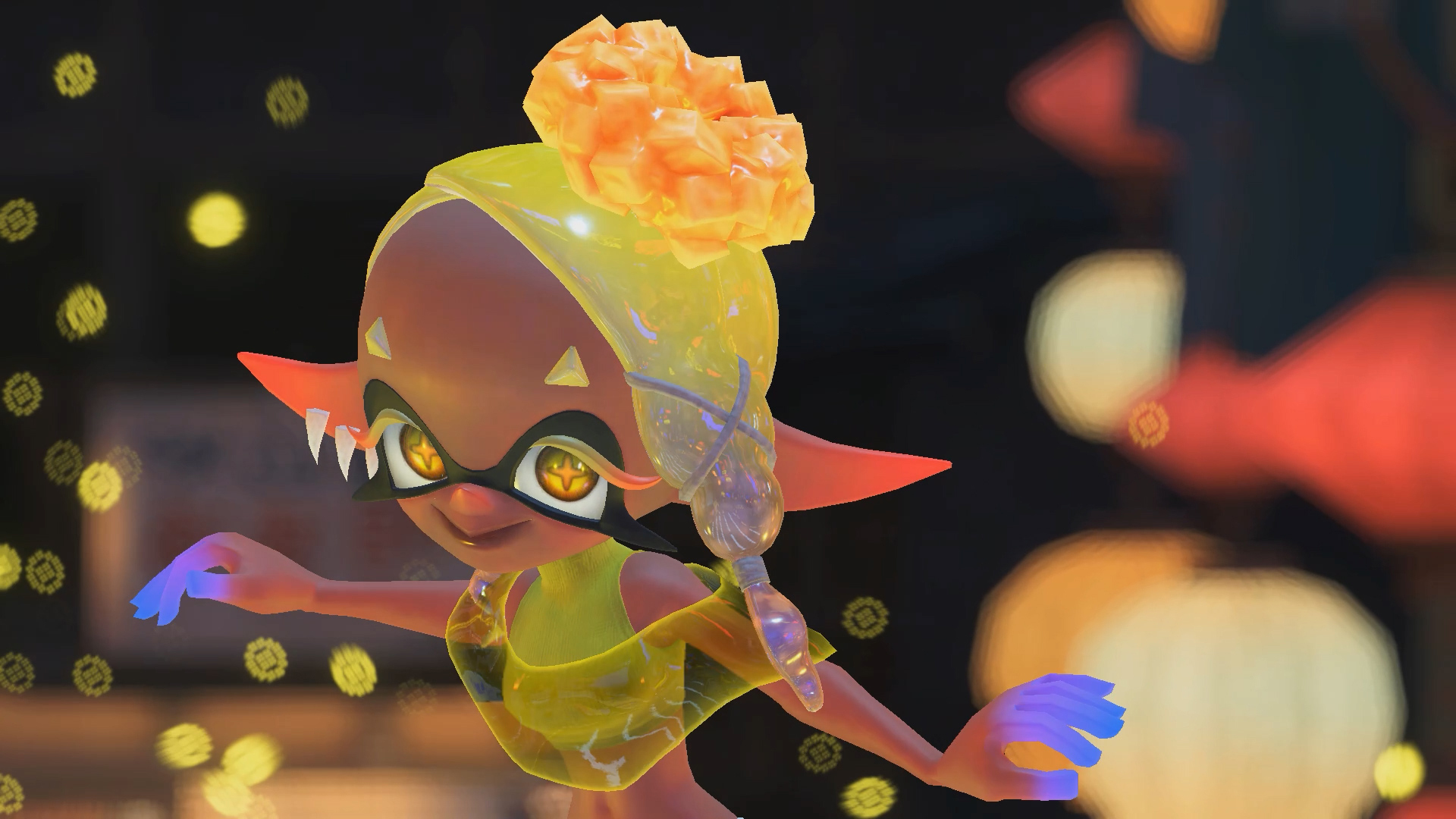 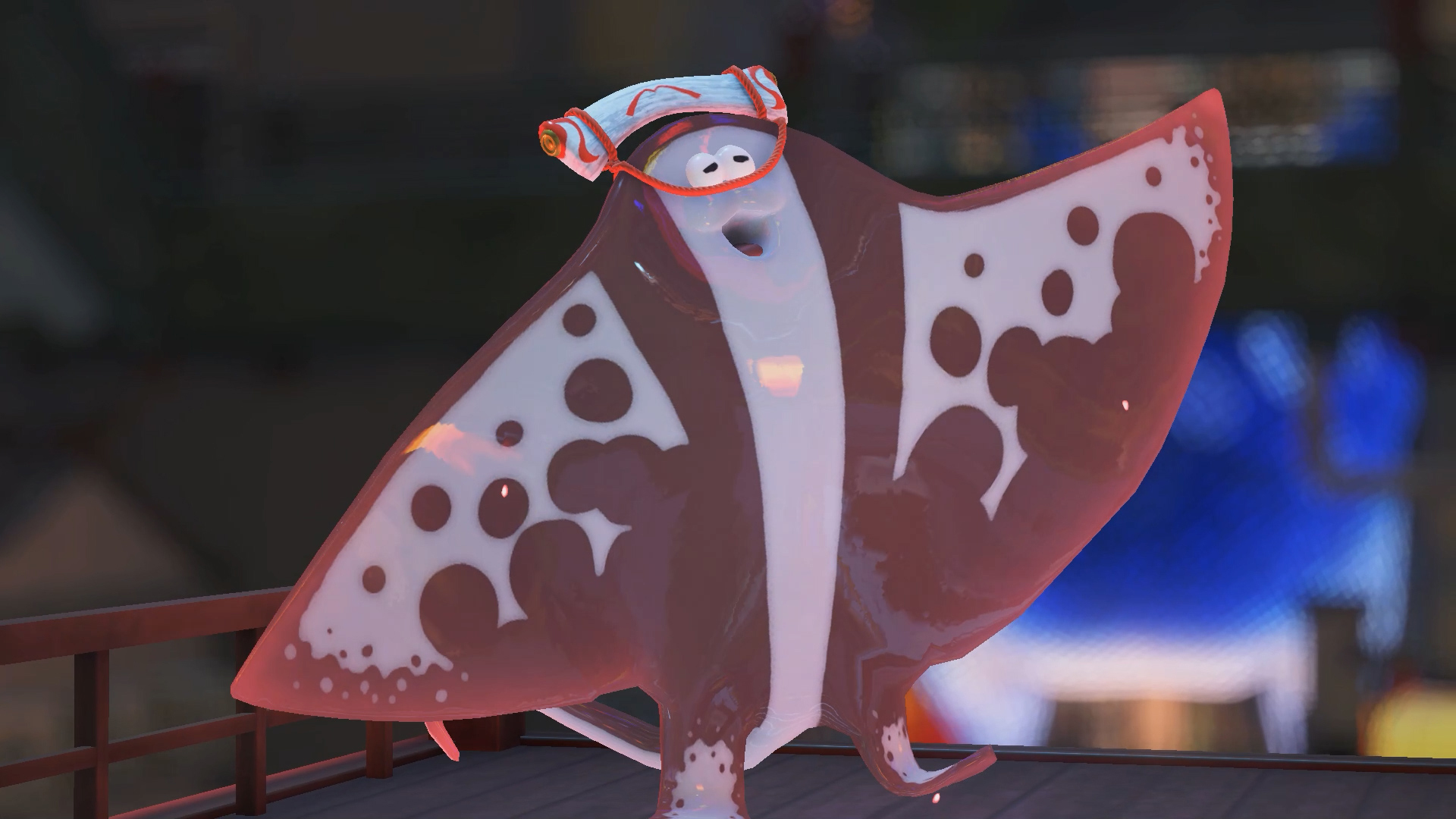 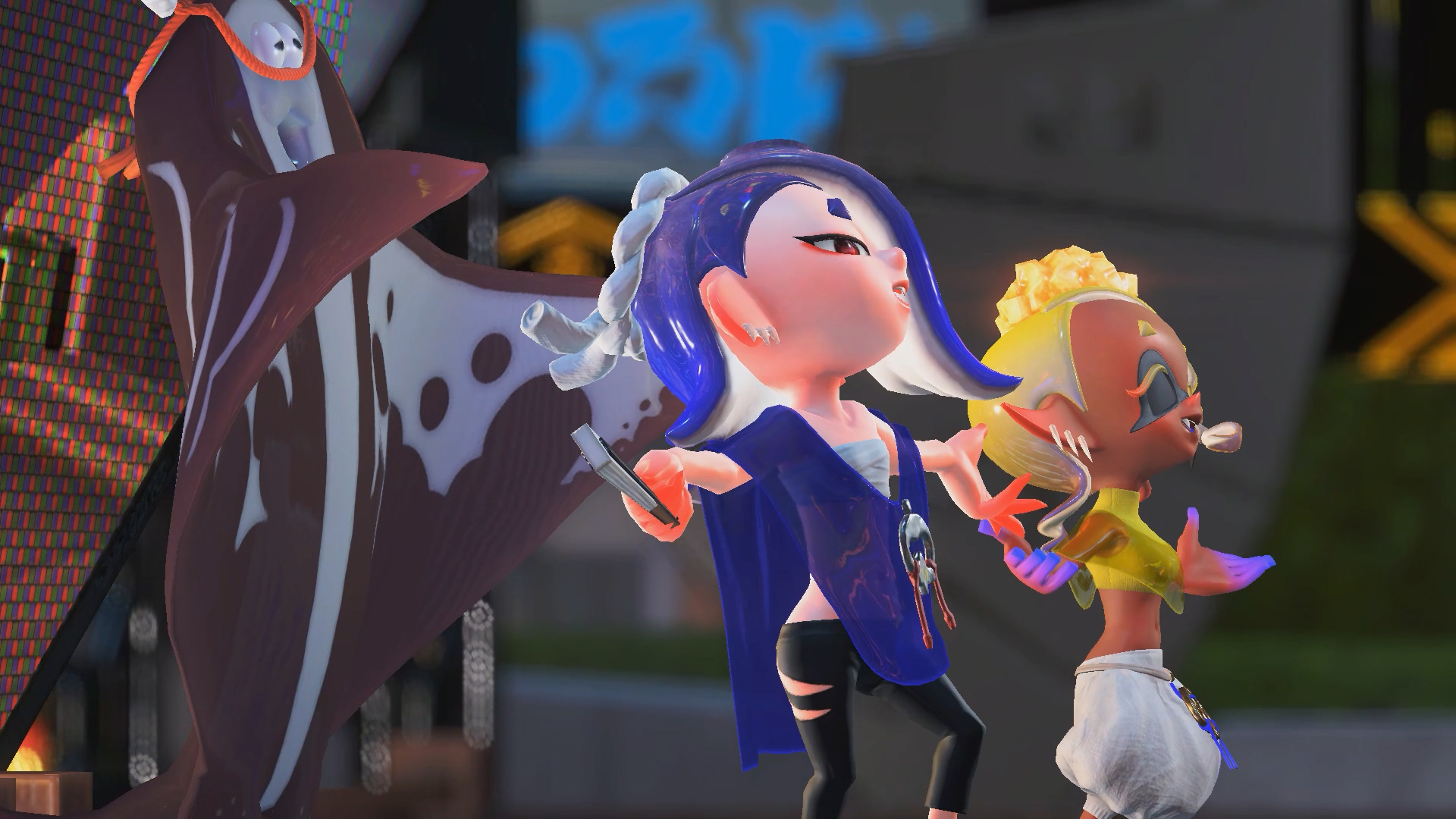 Between Turf War rounds, we got to experiment a little with the new lobby system, which serves as a testing ground for weapons and a social hub to see your friends represented as holograms. You can test weapons out on a series of dummies to see weapon damage too, which may be useful for competitive players.

Even with the wealth of options, though, we still didn’t see everything. We didn’t try the block puzzle minigame, Table Turf Battle, which combines a collectible card game with filling in spaces on a game board with tetromino-like pieces to claim territory. As an overhead approximation of filling the battlefield with paint, it looks like a clever idea, and I’m looking forward to trying it. We also didn’t try the Splatfest, so we still haven’t experienced the frenzy of a tricolor Turf War. The wait for that won’t be much longer, though, as the special Splatfest demo event is scheduled for August 27.

Then on top of all those modes, there’s everything surrounding the game that we saw in the recent Nintendo Direct presentation. The wealth of customization and communications options include decorating your Squid Kid or their locker, posting messages for other players, exploring the city, and more. We didn’t see any of those elements firsthand, but they’re the kind of little flourishes that help round out an experience. Nintendo has already outlined that it has a two-year plan for in-game events and catalogs to collect new fashion options to give it legs. Or tentacles, as the case may be.

Thanks to a wealth of gameplay options that have been refined over the past games and expansions, alongside a few new additions, Splatoon 3 looks to be the most robust Splatoon package yet. The underlying mechanics still feel as great as ever, but now there’s just way more to do with them.

Read More: Splatoon 3 Is Bursting With Things To Do

« How Splatoon 3 Blends The Series' Strengths Into An Inky Powerwash

Morty Is Out Now In MultiVersus »