Having not had a chance to actually play Pentiment yet, I can’t speak to the quality of Obsidian Entertainment’s upcoming mystery-driven adventure game. That said, I really like what I’ve seen of the game, and beyond that, I love that something like it exists. Games like Pentiment are what I’ve always wanted to get out of a service like Xbox Game Pass–experiences that are interesting and also afford a major studio the chance to be a little bit more experimental.

In Pentiment, you play as journeyman artist Andreas Maler in a story that spans 25 years during early 16th century Germany. Andreas finds himself staying in a Benedictine abbey in the midst of a journey to see all of Europe, taking on part-time work where he can find it to pay for his travels. While at the abbey, a murder takes place, and Andreas’s mentor is accused of the crime. With no one willing to investigate any other possible explanations, Andreas steps up.

The entire game is presented as if it were written in the pages of a manuscript or book of the time period, with the text emulating written scripts and early block typing and the character models, buildings, and backgrounds drawn to appear as if the line weight and color are the results of a brush. The act of moving between locations occurs as the pages of Andreas’ story turn. It’s not like anything Obsidian has done before.

The art style isn’t the only thing that’s new. As Pentiment game director Josh Sawyer reminded us during a preview event, a small narrative adventure game isn’t what most folks expect to see from a studio like Obsidian, which is most well known for its big-budget RPGs like Star Wars: Knights of the Old Republic II – The Sith Lords, Fallout: New Vegas, Pillars of Eternity, and The Outer Worlds. Its next major projects, Avowed and The Outer Worlds 2, are also both RPGs.

“[Pentiment] is a unique thing for Obsidian,” Sawyer said. “It is a historical narrative adventure game with light role-playing game elements. We use a lot of references from late medieval manuscript illumination as well as early modern woodcuts–because in the early 16th century, woodcuts were becoming more popular–to create our unique art style.”

“Art history had a huge impact on the creation of this game–in part because it is a history game and we’re trying to reference that setting and that time period as accurately as possible, but also because, at its core, this is a story about the experience of working artists at the time,” Pentiment art director Hannah Kennedy said. “So there was a lot to learn from art history to inform that character and how they exist within this world, but also inform how the space looks.”

“Making a narrative adventure game is something that Obsidian has never done before,” Sawyer added. “This is our approach to it. Much of your gameplay is really spent exploring the world and talking to characters and forming relationships with them.”

Although Pentiment is not an RPG, it does contain roleplaying elements. During the preview, Sawyer showed that you get to pick Andreas’ background, such as where he’s been, what sort of lifestyle he leads, and what subject he studied in university. These choices color how Andreas speaks to other characters and how he is able to relate to their troubles, opening up different avenues for how you might solve mysteries or complete various tasks. These RPG elements just aren’t the main crux of the game. For example, you could have Andreas have a background as an Orator, boosting his abilities to teach, persuade, and talk in front of a crowd. Or maybe you prefer he spends his time in university studying the occult, resulting in increased knowledge when it comes to astrology, necromancy, and ancient magical rites. Either way, Andreas is a learned man who attended university–however, one version of him better fits the mainstream crowd while the other can better speaks to those on the fringes of society. 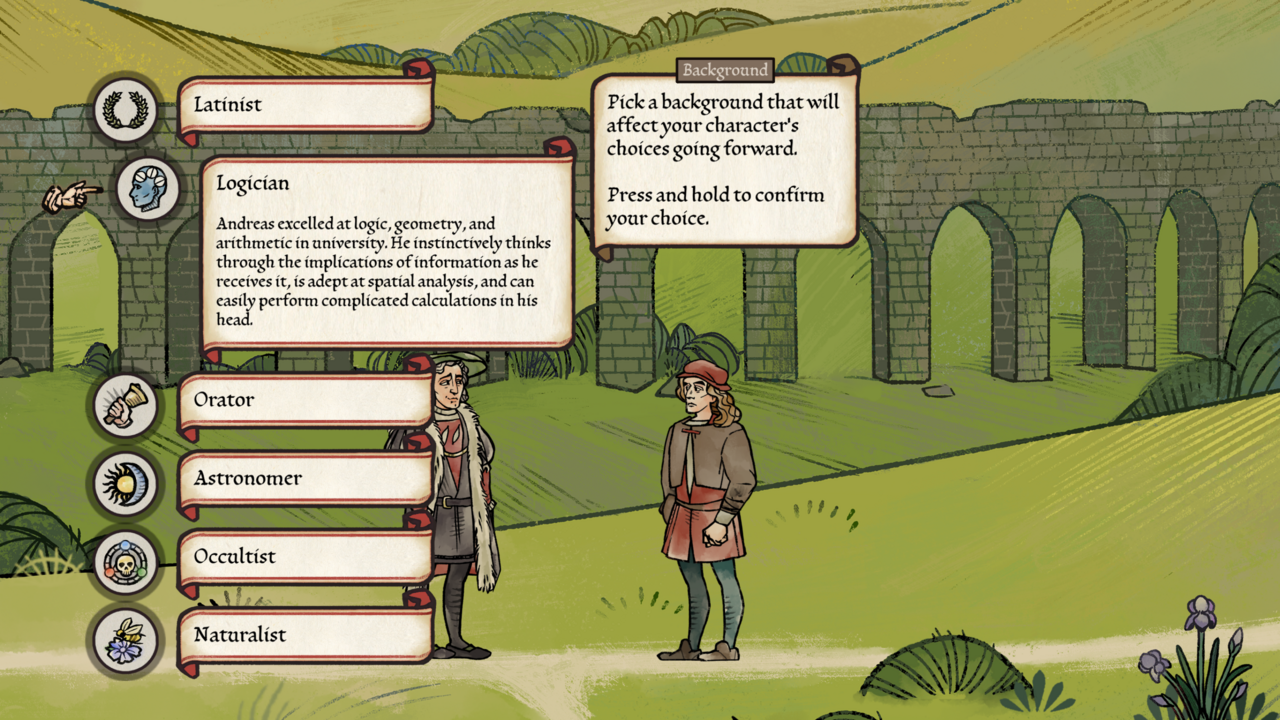 Now, I’m not saying that I only like what I’ve seen of Pentiment so far because it’s different from what I expect of Obsidian. The game manages to look really cool all on its own. I enjoy games that allow you to be a detective by finding clues, speaking to witnesses, and making your own deductions. Intriguingly, Pentiment has been designed where there’s no right answer to any of its mysteries, just different outcomes. That means you could figure out who most likely is responsible for a crime but still point out someone else, whether for vengeance or to ensure a good person isn’t wrongly punished. It’s an interesting consideration for a mystery-driven game to take on, and further separates Pentiment from the binary morality of a lot of RPGs, where dialogue choices are oftentimes reduced to general vibes of good and evil.

Given that Pentiment will span a period of 25 years, there’s ample time for your choices to have more than one consequence as well. Shifting the blame may solve a problem for you in the short term, but who knows what’s going to happen 10 years down the line? As time passes, kids will grow up, leaders will pass the torch to new generations, and the landscape of society will change. There’s a lot of compelling potential in a story like that. So many choice-driven games focus on snippets of time, like a few months or a year. It’s rare to see a game deal with choices that could have such far-reaching consequences.

However, beyond Pentiment looking interesting, I think there’s just something incredibly cool about how Obsidian is making a game like this at all, and that Xbox Game Pass had a hand in making it possible. “I’ve wanted to make a historical game for a long time,” Sawyer said. “And I can’t remember the exact moment where I was like, ‘Wait, what if I made a historical game that was a narrative adventure game that was very small?’ but I will say that it wasn’t until Microsoft was going to acquire Obsidian that I thought, ‘I think we can do this now for two reasons. One, Game Pass as a platform seems very appropriate for it. And two, I think that Microsoft would just be more willing to allow us to try something unusual and experimental.'”

Sawyer doesn’t believe his pitch for Pentiment would have worked through traditional publisher methods. In his mind, Xbox Game Pass is a “clear platform” for something as experimental as Pentiment coming from a big-name studio like Obsidian. And although making Pentiment was not intended to be a learning experience for Sawyer, Kennedy, and the rest of their team, it has been.

“This is the first game I’ve worked on personally where there’s a single central character in the narrative and ultimately there’s choice and consequence, but it’s about a predefined character and their particular…story arc,” Sawyer said. “It’s been really a lot of fun writing for a character that’s much more defined, but it still feels like you can make a ton of choices in dialogue and attitude, and you can choose to be a lot of different types of Andreas Maler and that feels really cool. And personally, I would like to work on more games that are like that. I don’t think that means that’s the only thing that I have to do, but I found it rather liberating in a lot of very cool ways, personally.” 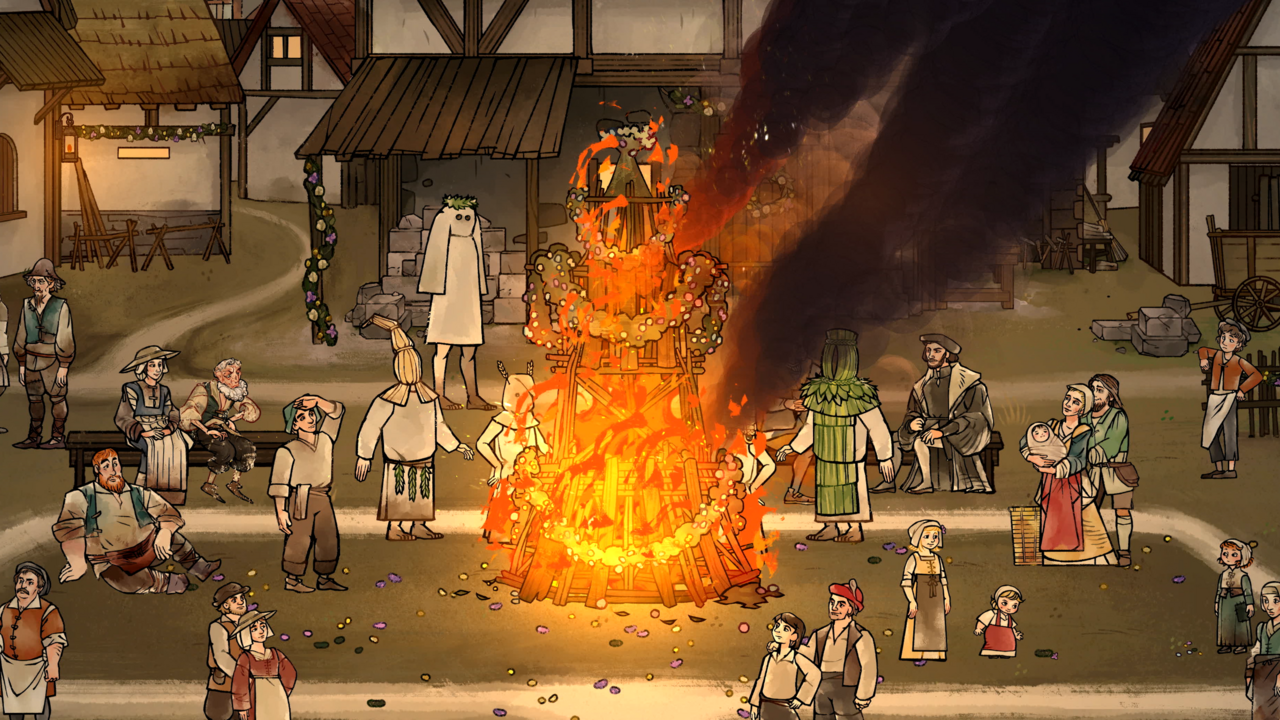 “Prior to this, I was working on The Outer Worlds, which was a very different scale of project and I had a very different role in it,” Kennedy added. And I think that a team of this size is really appropriate for a game like [Pentiment] because it is such an unusual sort of genre and appeal for this game and the ability to be really liquid and really flexible around our resourcing and who’s going to do what, who wants to experiment and try whatnot has been really useful to push this to the degree of strangeness in a good way that makes it land, hopefully. It’s been really fun to work with a small group of people that are extremely passionate and comfortable enough. We have a lot of pretty veteran people on this team comfortable enough to take some unusual risks and experiment, to try new things out and feel comfortable iterating, and to do a lot of experimentation that I think comes across with a lot of the how far we are able to push the art style, how strange we’re able to make some of the 3D [to] 2D space transitions and things like that.”

In a lot of ways, Pentiment reminds me of something like Child of Light, a fabulous 2D platformer turn-based RPG made by Ubisoft Montreal, a far cry from the 3D action games the studio is most well-known for. And it’s the small but noteworthy praise that these games can achieve that speaks to my desire for AAA developers to explore genres, storylines, and gameplay models outside their established wheelhouse.

I know why it doesn’t happen more often. Large studios have to turn a profit with their new games and exploring smaller, creative ideas outside larger, mainstream ones could ultimately prove to be a wasted effort. Why allow any of the developers working on Battlefield the option to try making a parkour-focused platformer or story-driven roguelike when big-budget first-person shooters are an easier sell and Battlefield has been a big name in that space? It’s the safer bet to only stick to what you know will sell.

Each of the Xbox Games Studios can kind of get around that expectation with Xbox Game Pass, though. A subscription service is only as strong as the library it offers and the regularity at which it’s curated. It pays to have a cadence of new titles rotated into the subscription’s library (or, at the very least, meaningful updates to included live-service games), especially if some of those games can’t be found on other platforms. That’s a trickier ask if the only exclusives you’re pulling from are the giant AAA experiences that take huge teams and piles of money and resources to create. We’re already seeing how well that can work–Xbox Game Pass doesn’t get brand-new AAA exclusives all that often. Most of the exclusives on its platform are indie or AA games, many of which make their way to non-Xbox consoles eventually. 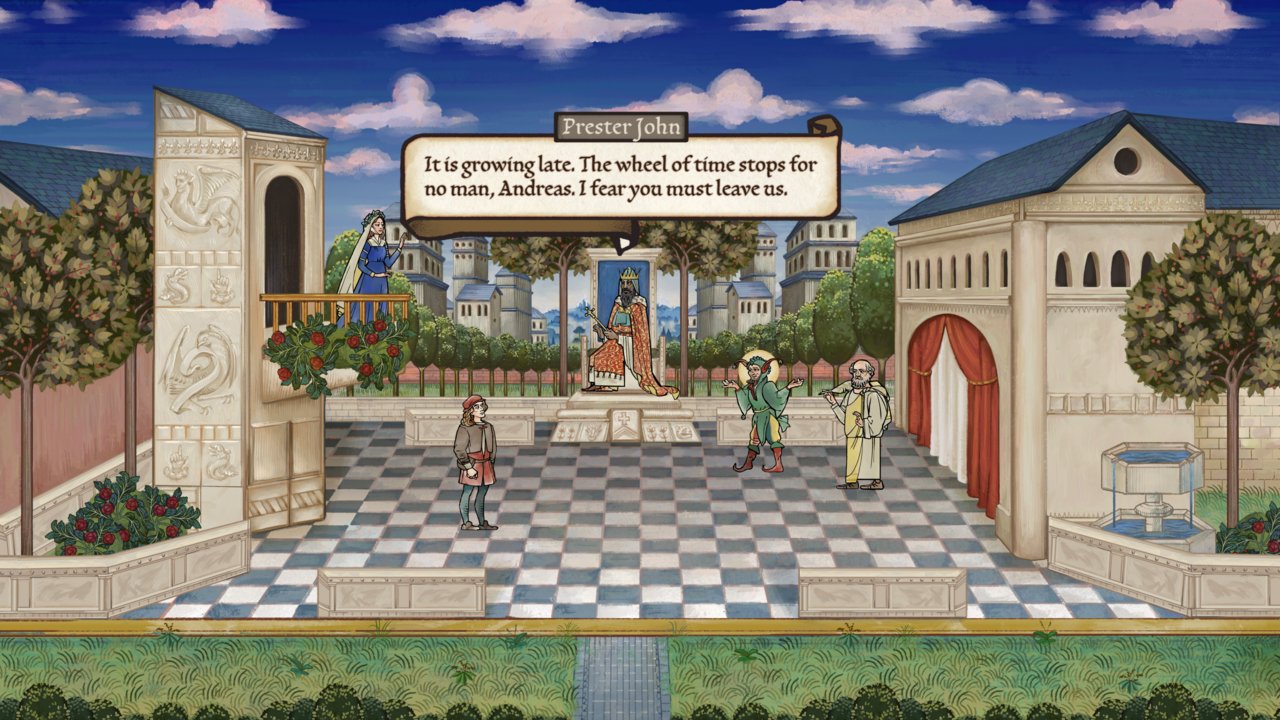 And so with that in mind, it pays Xbox to support segments of its AAA studios who want to work on smaller projects that can be produced more quickly. These smaller games don’t have to be critical or commercial successes (looking at you, Grounded), as they’re instead contributing to the overall worth of Xbox Game Pass.

So I’m excited for Pentiment. The game looks fun to play and I’m excited at the prospect of how the consequences of its choice-driven narrative may play out over the course of a storyline that encapsulates 25 years. But I’m also just happy to see Xbox and Obsidian giving the go-ahead for a small segment of its team to work on a game like Pentiment. It gives me hope that Xbox Game Pass might allow some of Microsoft’s other first-party game studios that have traditionally been making one specific style of game, like the Halo-focused 343 Industries or largely immersive sim-focused Arkane Studios, the chance to make smaller, more experimental games outside their traditional wheelhouse.

Read More: Pentiment Is What I’ve Wanted To Get Out Of Xbox Game Pass