Madden 23 Ultimate Team: How To Build A MUT Team For Free

Madden NFL 23’s Ultimate Team is back. The popular online mode is still all about pack pulls and odds that make Genshin Impact look like a Dave & Buster’s crane game, but it’s not impossible to build a dream squad that plays well above its overall without microtransactions. This year’s edition of MUT features a number of updated tools for sets, re-rolls, and power-ups, and newer additions like the Field Pass add value to new program cards and XP grinds on the weekend.

Being “no money spent” in Madden is a “serenity now” moment in itself, so we have put together a cheat sheet on how to counter paywalls and H2H goons with your own creative spin on MUT 23.

Do your daily missions

Dailies are often neglected because Twitch Drops are right there, but similar to Skills Trainer rewards, they’re mini accomplishments that take no time at all. Season 1’s objectives require MUT players to “Complete A Set”, “Purchase A Pack”, and “Record 200 Offensive Yards”, and crossing each one off unlocks one Random Strategy Item and one Daily Coin Quicksell. They don’t hold a lot of value, but either item can be sold for up to 25,000 coins (on a good day) and stacking daily objectives over time unlocks additional Season 1 XP–including 25,000 XP at 10 Days and 45,000 XP at 30 Days.

Level up with Field Passes

Field Passes are MUT 23’s answer to NBA 2K’s Seasons and MLB The Show’s Featured Programs–reward track systems that are leveled by playing Madden NFL 23 and used to unlock exclusive packs, coaches, and player items. There are three different types (Season, Competitive, Program) and each one complements the others with shared XP and stat-based missions that apply to new challenges, themed programs, and MUT Champions. They’re entirely optional, but they’re worth the time as they provide direction, an easier to-do list, and Field Pass LTDs like 86 OVR Headliners Derrick Brown. 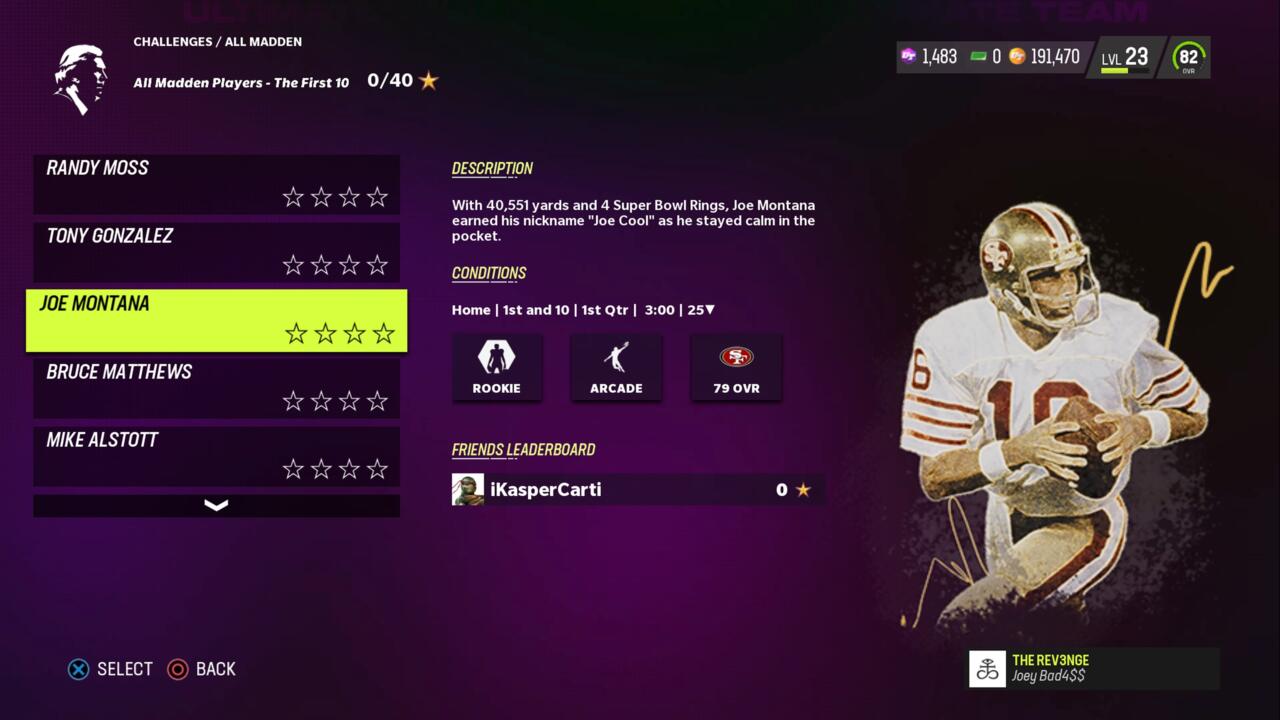 Grind solos with Moss, Alstott, and Montana.Get those challenges done

Solo Challenges are still the wave as they can be used as mid-snap tryouts for new legends, position upgrades, and QB cards that deserve second chances. For offline duos, it’s an easy way to get coins and Season XP for Field Passes, and for free-to-play veterans, it’s a daily ritual with Team Captains and rewards like 86 OVR All-Madden Team Randy Moss (OOP). It turns into a Binder Filler Generator at some point, but maxing out stars with each new set of challenges will farm additional XP for the current Season and its correlating Program Field Passes (i.e. Headliners, Campus Heroes).

Build your own dream team

There’s Headliners Donald Parham Jr., Nickel 3-3 Blitzes, TikTok builds, and an eBook metaverse that no one really knows about, but Ultimate Team is still about finding your niche. There is nothing that prevents you from adopting Run And Gun, West Coast, or 3-4 Under strategies to develop your own hybrid schemes–whether it’s Power Backs Only, TE Options All Day, or an Air It Out 2.0 with Team Affinity Joe Burrow slinging absolute darts to a themed-out, all-Bengals squad. MUT 23 is a lot more flexible than past versions of the mode ever were, and Week 1 matchups haven’t even kicked off yet. 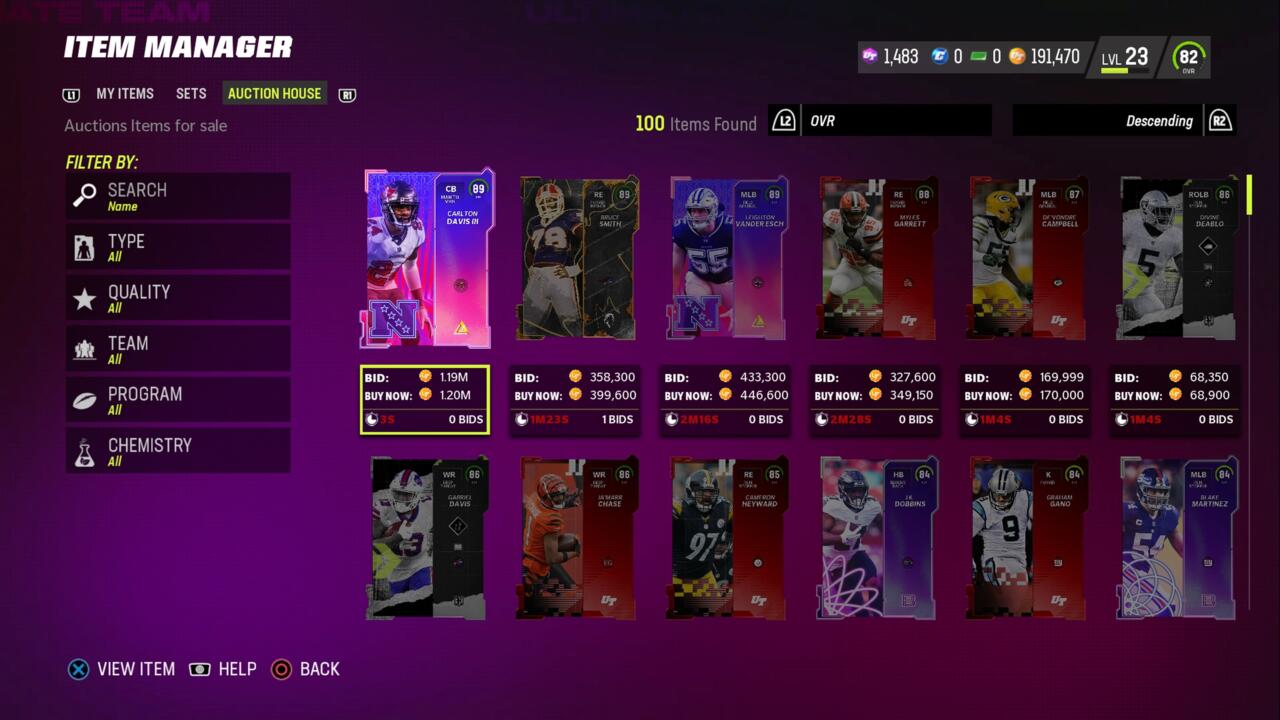 There are methods to the MUT Auction House.Find your way with auctions

Don’t let the price of 89 OVR Team Affinity Carlton Davis III fool you; there’s a lot to love about the MUT Auction House. Quick snipes on new releases? Check. Need items for set re-rolls? Bet. Trading low golds for new training upgrades? 100%, even though that’s what Twitch Drops are for. There are multiple ways to approach auctions instead of going the traditional buy/sell route and figuring out what works for your team build can help you maximize coin gains and theme team chemistries.

Madden 23 is still very much a grind, but in a better way this year. Playing Solo Battles, H2H Seasons, and MUT Champions can stack up XP and bragging rights, but it also counts toward progress in new reward tracks like the Competitive Field Pass. Competitive Points (CP) are used to level up and earn coins and additional Season XP, and if MUT Champs Entry Tokens aren’t your thing, there’s still a long list of free packs (Touchdown, Rookie Premiere) and limited player items like 88 OVR Trevor Lawrence. Competitive Passes refresh every other Monday and if all else fails, there’s still House Rules mode, which plays like Superstar KO but with a twist.

For more on Madden 23, don’t miss our complete guide to rosters and ratings for all 32 teams, our Madden 23 tips if you’re starting out, and our own list of all the game’s X-Factors and Superstars.

Read More: Madden 23 Ultimate Team: How To Build A MUT Team For Free