When Madden 23 launches this month, it will come, as always, with several much-touted new features, such as an on-the-field overhaul, collectively called Fieldsense, as well as new wrinkles to the game’s Franchise mode, Face of the Franchise mode, and more. With just days to go before launch and a day-zero patch now made public, Madden gameplay producer Clint Oldenburg says the major takeaway from the beta is that the always-vocal Madden fanbase is in lockstep with EA Tiburon when it comes to what this year’s game should look, play, and feel like.

“The two most active pieces of feedback from the beta were, ‘don’t significantly change gameplay for launch’ and ‘please don’t nerf the pass coverage,'” Oldenburg told GameSpot. “And we were really excited to get that feedback, because not only did we spend a lot of time working on pass coverage to bring more balance to the deep-passing game, we also brought an increase in pass rush.” The fact that players’ biggest request so far has essentially been “if it ain’t broken, don’t fix it,” bodes well for launch, Oldenburg believes.

Madden 23 is focused greatly on “bringing more balance to the defensive side of the ball,” Oldenburg said, and the beta helped greatly in finding the right balance between giving players more influence on defense while still holding true to the league Madden mimics–one that is now pass-happier and higher-scoring than ever before.

“In the first week or two of the beta, the pass rush was a bit more juiced than we wanted,” the producer said, but added that it came down to a bug that has now been patched out. What’s left, however, is still an amped-up pass rush in Madden 23, which the team hopes is a way to dial down the deep passing game a bit. With added pressure, pockets will collapse faster and QBs won’t always have as much time to wait for routes to develop.

Smarter AI now instructs defensive ends to disengage blockers when players hit the right trigger, which indicates they may be looking to scramble, or at the very least, dance around in the pocket a bit. Containing the QB should get easier as a result, so guys like Lamar Jackson and Kyler Murray won’t as frequently be able to let their legs bail them out. In total, quarterbacks will need to learn to read the field faster, because edge rushers will be closing more quickly in this year’s game.

“What we’re trying to take away are those third-window throws, Oldenburg said before launching into an all-too-common example. “Those are the ones where you call a slant play, and you’re gonna sit back there until that guy’s turned it into a post and hit that third window between the low linebacker and the safety all the way across the field. We want you to throw the ball on time and not rely on those chunk plays to move the ball over and over.”

The beta didn’t only give players defensive buffs, however. Following some fine-tuning in the beta, the league’s elite wideouts will now more consistently leave middling or worse corners in the dirt, with Oldenburg explaining that, as the ratings delta between a receiver and a defensiveback expands, players are going to see greater separation on the field. I asked if this meant a Franchise player may then want to consider building a defense back to front. Since the pass rush is getting buffed this year anyway, perhaps you could get away with middling talent on the line and pay or develop stars at corner and safety instead? Oldenburg pushed back against the idea, and gave a very mechanical explanation as to why you’re still going to want talent on the defensive line. 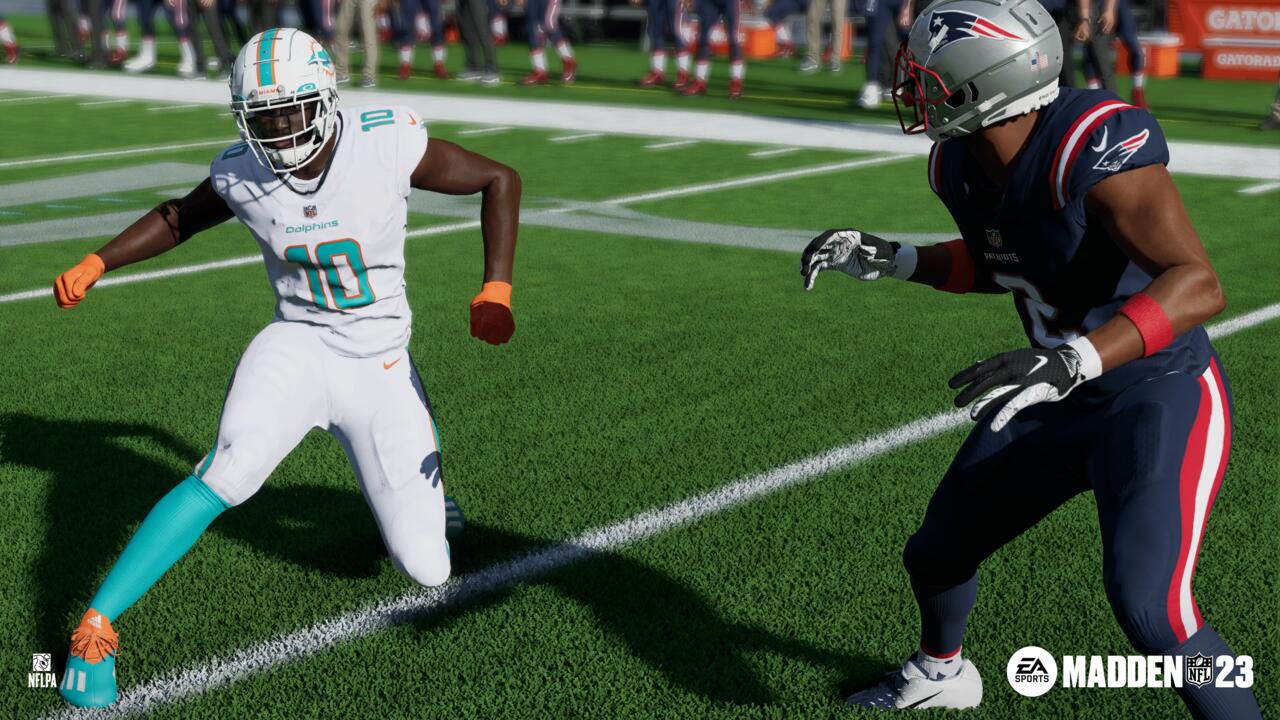 Elite receivers will better separate from CBs who are severely outmatched.

“You still do want pretty good linemen up front, because there’s a wait time that each defensive lineman has before they can start their first move. And the higher the advantage for the blocker, the longer that defender has to wait. So you still do have an opportunity to slow that pass rush down with really good offensive linemen.” An additional wrinkle, which he said actually isn’t new to this year’s game, stresses the importance of an offensive line’s collective awareness rating. “As your offensive line’s awareness rating increases, and we average it across all five offensive linemen, and actually double it for the center, they can start to anticipate blitz better.”

Like when the team added X-Factors a few years ago, it seems like the North Star continues to be allowing the divide between great, good, and bad players to be felt on each play. For every elite player at one spot, like edge rusher or wideout, a counterpunch is available for a wisely-built team. Where deficiencies exist, however, elite talent looks like it will continue to take over games, much like when see on real NFL Sundays.

Speaking personally, my biggest concern during the beta was the lack of onboarding for the game’s new Skill-Based Passing mechanic, which is meant to give a new level of control over ball placement never seen before in Madden. But it was more confusing than it should be in practice. Much of the Madden community came to a similar determination: Once you get the hang of it, there’s no going back. But the initial hurdle was too daunting.

“Our onboarding experience wasn’t quite ready for the beta, Oldenburg told GameSpot. “And so people just kind of got fed from the water hose initially, and we kind of knew it would feel overwhelming. But by and large, we felt once you get your hands on it, and you feel it, it’s actually pretty intuitive to understand.”

Still, the team has added new onboarding elements to ensure players don’t just dismiss it on sight. Oldenburg said that the game will now lead players into the tutorial similar to how MLB The Show first asks new players to choose one of several control schemes for themselves. “We’re going to put out some developer deep dive videos and blogs that are going to be able to illustrate what we mean when we say you can make throws with this system that you’ve never been able to make before such as back-shoulder fades or back-pylon fade routes. And then putting the ball specifically where you want between zone defenders is really powerful once you master that system.” 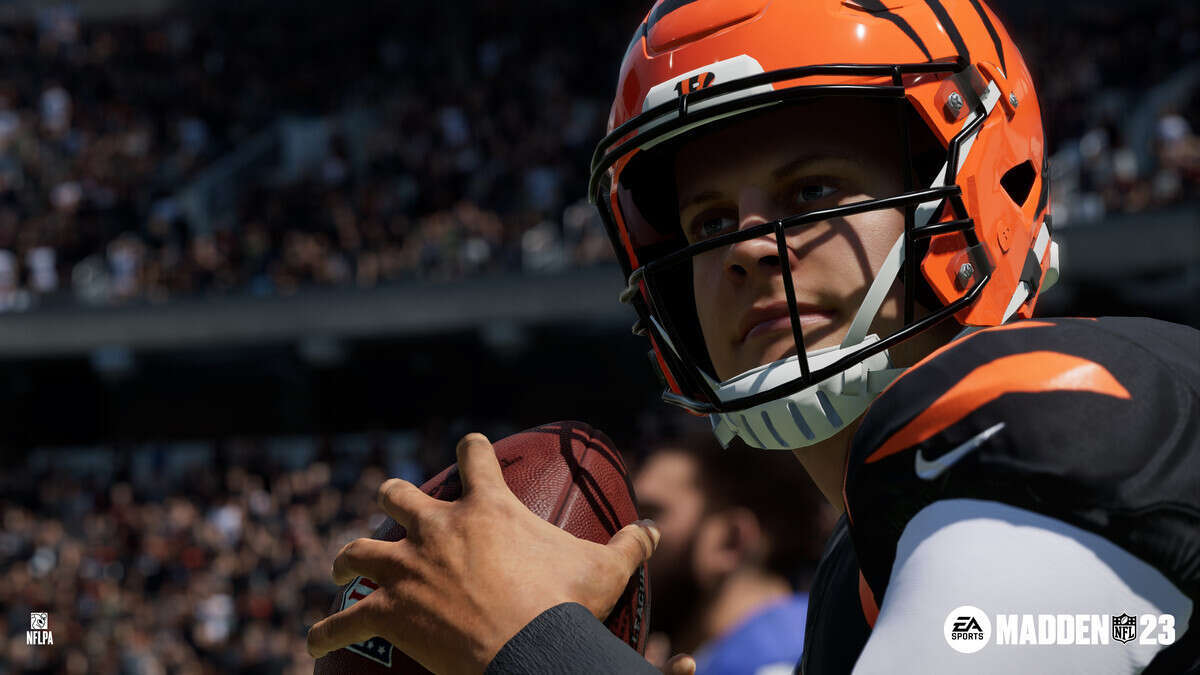 The team has also added an extra layer of visual feedback to the mechanic to help players understand when they’re using it well or not. “The reticle of the Skill-Based Passing system, that color is going to match the feedback text. So you know, if you get the perfect accuracy, I think it’s that neon green color all the way down to very inaccurate, which is that red color, the reticle is the same color as that text. So no matter where your eyes are at, you’ll be able to associate the outcome of your metering usage.” In this most up-to-date iteration, it sounds a lot like shooting the ball in NBA 2K or fielding a grounder in MLB The Show, and that’s definitely good company.

The perception of annualized sports sims is seldom hopeful or favorable, and it was clear that, as Oldenburg spoke, he spoke for the team when he said they’re feeling positive following what seems to have been a strong beta. Naturally, a lot more players having a lot more time with the game beginning on August 16 will likely reveal a crop of new issues that will dominate the Madden YouTube and forum communities, but EA Tiburon hopes the fact that the fans have generally been on the same page as the team this summer may mean the studio can better build for the future.

A Remake Of One Of The Best Vintage Star Wars: Dark Forces Shooters Is Coming »