How To Get The Quicksilver Storm Exotic In Destiny 2

Season of Plunder has added several new Exotics to Destiny 2, but out of all of them, Quicksilver Storm stands apart as a fascinating glimpse of what’s to come in 2023’s Lightfall expansion. Featuring a design that’s unlike anything seen in Destiny 2 so far, the Exotic auto rifle packs a punch with rock-solid specs, perks, and an explosive finisher that makes it a handy all-rounder.

How to get Quicksilver Storm 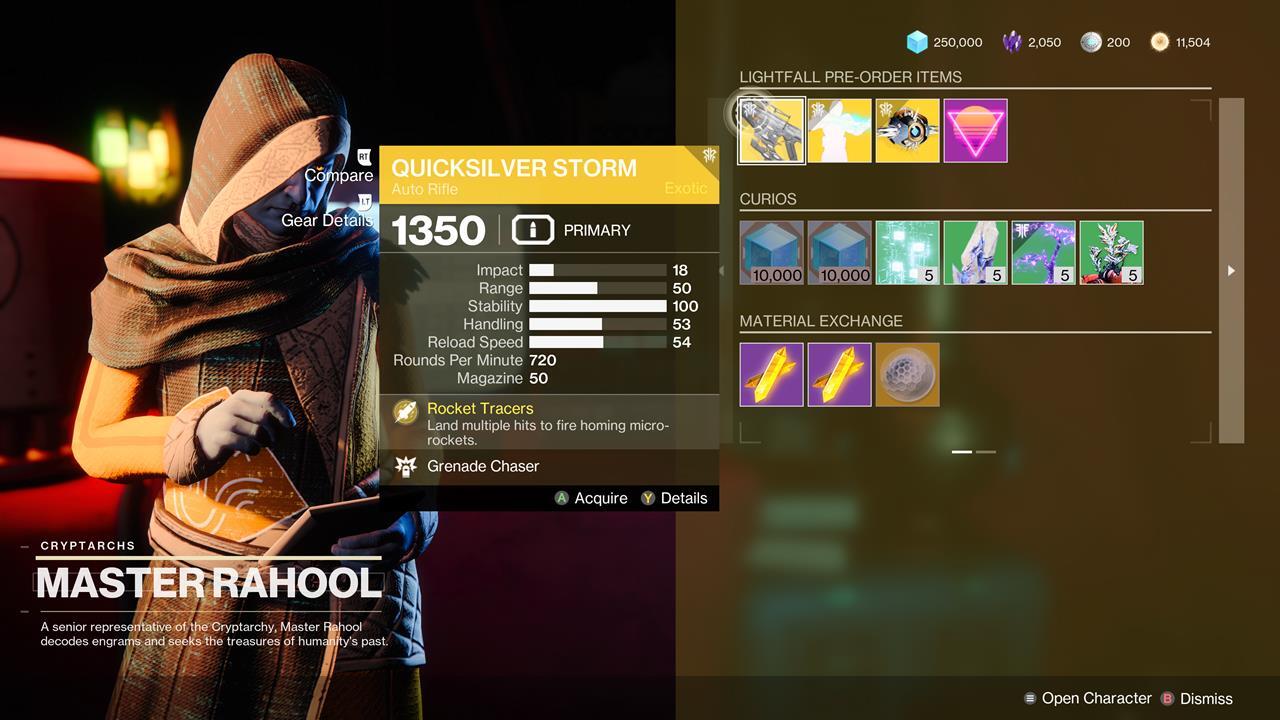 Pay a visit to Master Rahool to get the Quicksilver Storm Exotic.

The short answer is that you’re going to have to pay for Quicksilver. With Lightfall scheduled to launch on February 28 next year, Bungie is currently offering Quicksilver as a preorder bonus for anyone who purchases the Lightfall and Annual Pass combo. That’s a $100 ticket to the future of Destiny 2, and also includes a few other bonuses that you’ll be able to add to your collection, such as a cool banner, Exocitc Ghost shell, and an Exotic Strand emote. When Lightfall starts, you’ll also be rewarded with extra Upgrade Modules, Ascendant Alloys, and other materials.

As a kinetic auto rifle, Quicksilver Storm hits a sweet spot for mid-range combat and can shred through enemies with a 50-round magazine. It has a vertical recoil and a moderate spread when firing from the hip, making it great for landing precision shots on weaker enemies. What makes it special are its two unique perks Rocket Tracers and Grenade Chaser. Rocket Tracers allows for a very quick homing mini-missile to automatically fire from the gun after you land around 10 successive hits on an enemy, and landing multiple missiles will generate a grenade that’s stored inside of the gun.

You can stow Quicksilver Storm away and switch to another weapon without having to worry about losing the stored grenades. If you fall in battle though, you’ll need to generate new grenades from scratch. You can save up to three explosives and turn Quicksilver Storm into a pump-action grenade launcher by holding down the reload button. Each grenade automatically explodes when in proximity to an enemy, and does a reasonable amount of damage.

Landing multiple hits turns your next shot into a homing micro-rocket.

How to get the Quicksilver Storm catalyst

Quicksilver Storm doesn’t have a Catalyst currently, but it’s possible that Bungie will add that option when Lightfall launches next year. 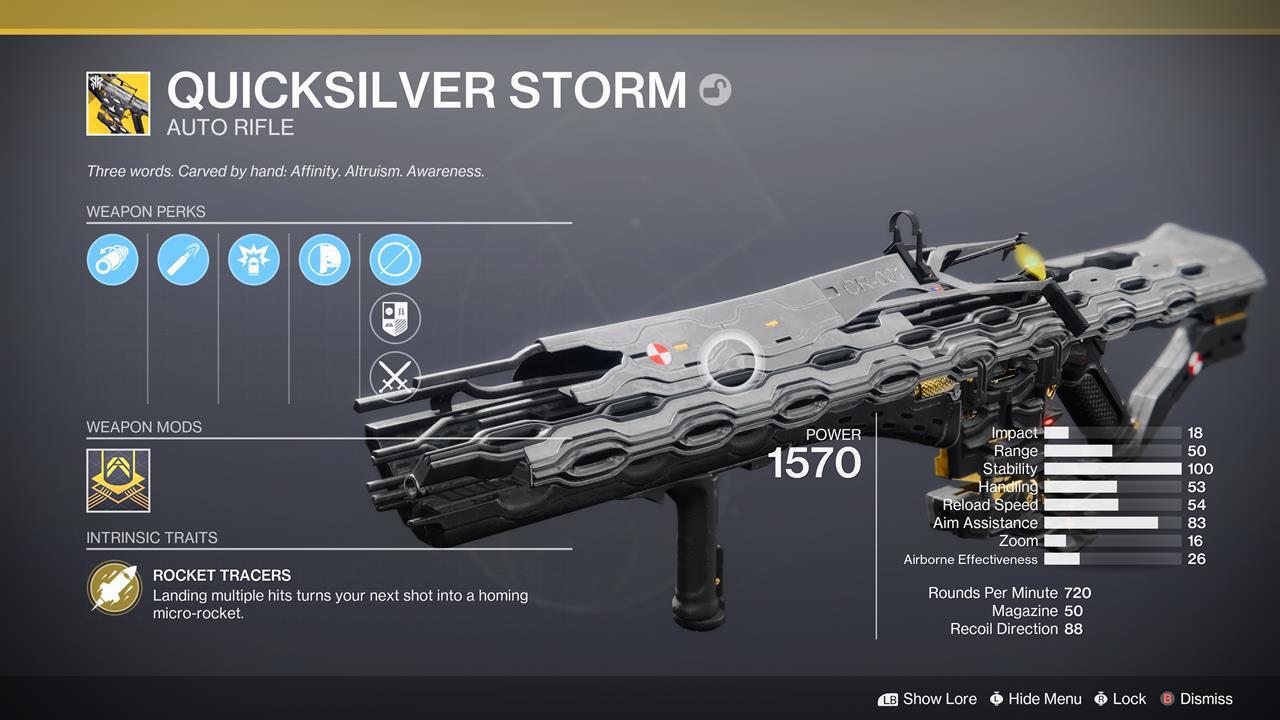 Bullets, missiles, and grenades in a single weapon.

In PvE, Quicksilver Storm can be a damage-dealing beast. For larger bosses and enemies with bullet-sponge health bars, sustained fire throws a hail of bullets and mini-missiles at them and quickly piles up the damage. While reloading is quick, being able to switch from an empty magazine to the grenade launcher mode once you have projectiles stored within it makes it even more valuable and ideal for clearing a room.

Titans will find this weapon particularly useful when paired with the Actium War Rig Exotic armor. That gear reloads auto rifles and machine guns automatically, and with Quicksilver Storm equipped, Titans can unleash a storm of bullets and homing missiles on enemies.

For players who regularly pursue high-level activities, Quicksilver Storm can also come in handy for Legend Lost Sectors and Nightfalls. The Seasonal Artifact, Skeleton Key, has a mod slot for auto rifles so that they can break through the defenses of Barrier Champions, making this Exotic useful in those situations. For PvP players, there are numerous factors to consider but the auto rifle is a fun weapon for competitive play when you start melting through shields and launch a mini-missile as a quick finisher. The grenade also does heavy damage to players, and can be a useful finisher in the right scenario.

Season of Plunder also has another great Exotic weapon that you can unlock, Delicate Tomb, if a kinetic auto rifle doesn’t fit into your current Guardian build plans.

The lore tab for Quicksilver Storm reveals that the weapon came into the possession of Elsie Bray AKA the Exo Stranger, who took it to the desolate moon of Ganymede that orbits Jupiter. Talking to her floating fish friend Tokki–the rifle identifies Tokki as a juvenile species of Pouka–Elsie comments that she has never seen a weapon like this in all of her travels across time and space. At this point in Destiny 2’s story, the city of Neomuna is still hidden on Neptune and has managed to become a technologically advanced stronghold.

As Elsie mentions, Quicksilver Storm has nanite elements similar to the nanotechnology of SIVA, but far more advanced in its overall design. The overall impression of the weapon is that even when compared to the best of Golden Age technology, the design is lightyears ahead of what humanity was capable of at the time.

Read More: How To Get The Quicksilver Storm Exotic In Destiny 2

Dead Island 2 Preorders Are Live: Here's What You Get With Each Edition »