Season of Plunder has added a new Exotic weapon to the arsenal of Destiny 2, a deadly fusion rifle that ties into the themes of piracy and Arc 3.0 gameplay for the next several months. Delicate Tomb is the name of the weapon, and if you’re planning to focus on your Arc subclass this season, it’ll be an invaluable tool for your Guardian.

How to get Delicate Tomb 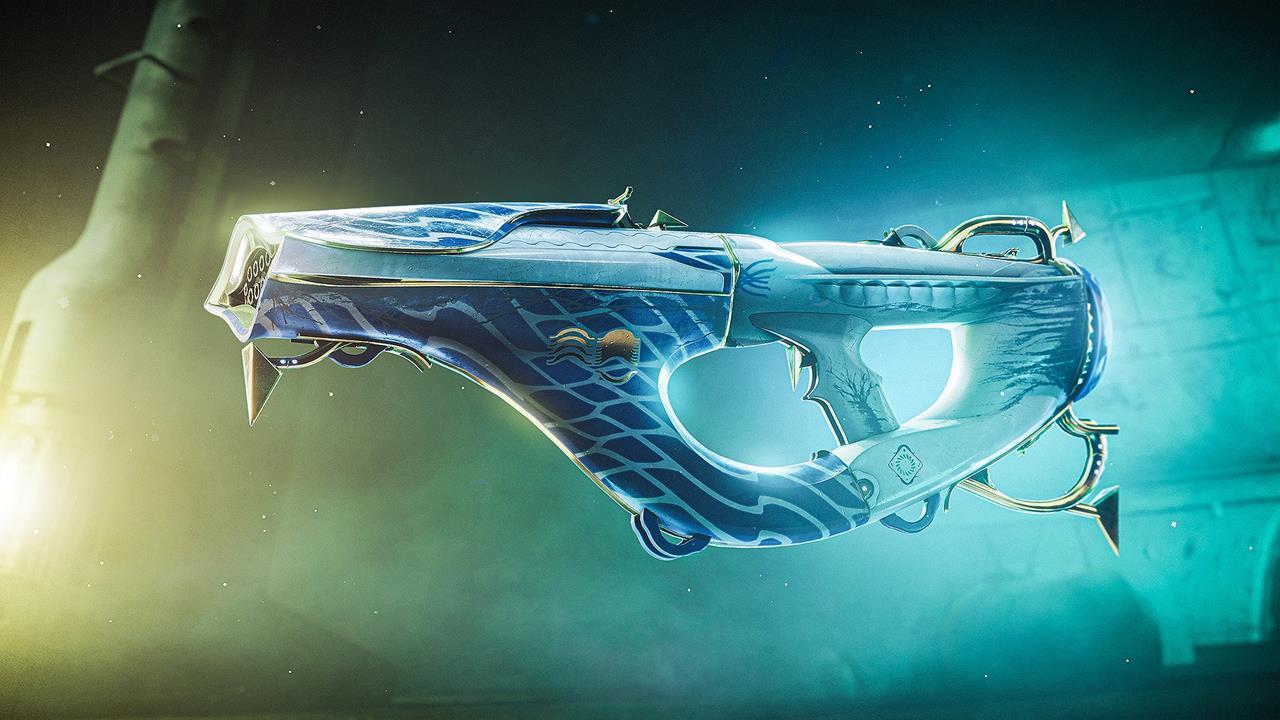 The good news is that everyone who plays Season of Plunder has a path to get the Arc fusion rifle. Owners of the premium season pass can grab it from the Season 18 tab, and the Exotic will be available at level 35 on the free tier. You can easily grind out 2-3 levels a day, so it won’t take you too long to add that Exotic to your collection. If you’re ready to make the plunge and grab the premium season pass for Season of Plunder, it’ll set you back around $10 for the 1,000 Silver in-game currency that you need to unlock it.

It’s worth noting that at level 100 on the premium season pass you can also unlock a new weapon ornament for Delicate Tomb, Avant-Garde Mausoleum, and turn it into a colorful killing machine. 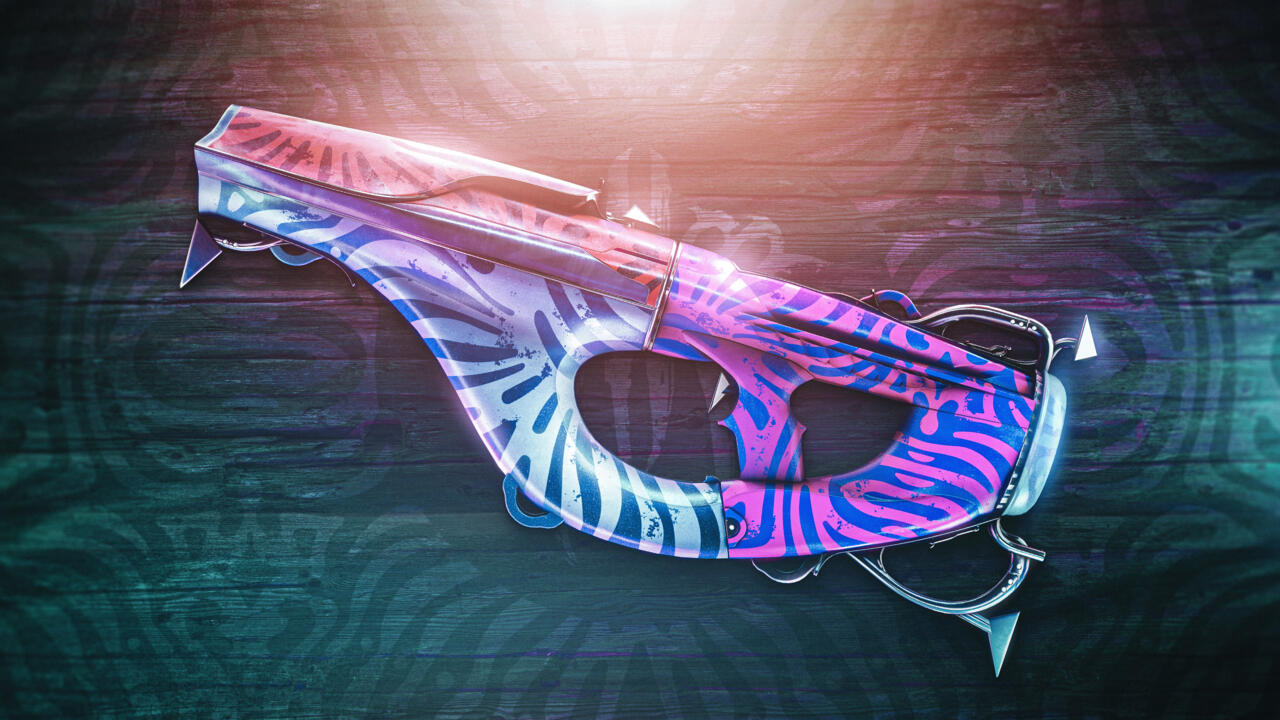 There’s a colorful ornament that you can unlock for Delicate Tomb during Season of Plunder.

Delicate Tomb operates differently when compared to standard fusion rifles, as it can unleash a horizontal spread of Arc-energy projectiles when hip-fired. You can still aim down the sights for a tighter cluster of rounds to be fired off, and if they make contact with the enemy, there’s a good chance that they’ll be vaporized and leave Ionic Traces in their wake. Collecting an Ionic Trace will overcharge the next round to leave targets debuffed with the Jolt effect, creating chain lightning effects between enemies when the Jolted enemy is damaged. For Arc 3.0, Ionic Traces help refuel your grenade, melee, and class abilities slightly faster.

How to get the Delicate Tomb catalyst 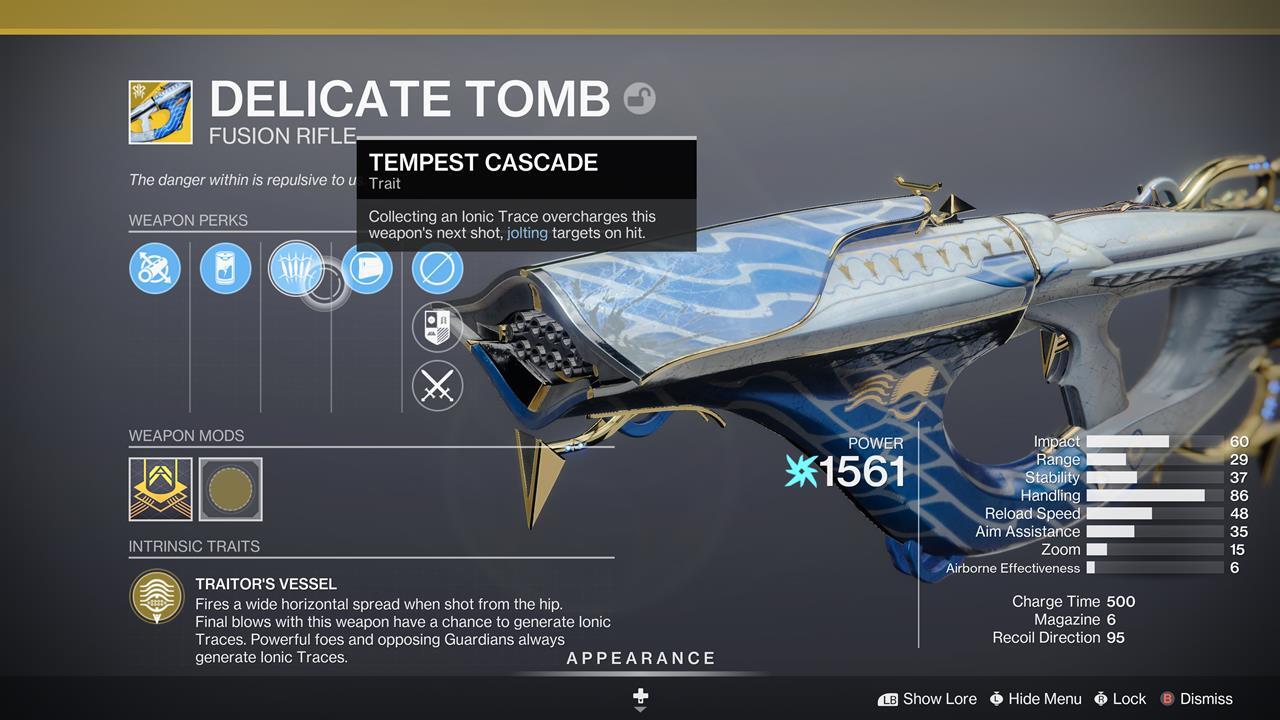 Once Delicate Tomb is in your possession, you can head on over to Banshee-44 in the Tower social space and pick up the Delicate Tomb catalyst quest The Form of Danger. You can speed up the process by unlocking Catalyst Quest Boost bonuses at rank 11 and 22 on the premium season pass.

It’s worth noting that the Catalyst quest does appear to be bugged right now and progress isn’t registering correctly. Bungie is busy investigating this issue and a fix will hopefully be applied soon.

The quickest way to burn through the first step is to have Delicate Tomb or any other weapon that uses special ammo in your energy slot equipped and in use whenever you have ammo available for it. The new Ketchcrash activity also happens to be loaded with challenging combatants that you can defeat, but you can also hit up your favorite Strikes, Dungeons, and Lost Sectors to help you through this part of the quest.

Note: This is where the previously mentioned bug kicks in.

This is where the real grind kicks in, as this part of Delicate Tomb catalyst quest does require defeating hundreds of opponents to inch your way up the progress bar. The trick here is that quality counts, so the more challenging the opponent, the more points you’ll earn. There are various areas in Destiny 2 to work your way through to help with this part of the quest, so if you’re feeling competitive, take Delicate Tomb into the Crucible for some PvP grinding.

For PvE options, the Derelict Leviathan has tough enemies spawning regularly into its sections. You can play Nightmare Containment to deal with waves of enemies or you can explore the Royal Pools and Pleasure Gardens to find tough Nightmare enemies. Once you’ve made enough progress, the hard work will be over. Otherwise, try Ketchcrash, Expeditions, and Nightfall Strikes to help speed this process up.

Head back to the Tower and turn in your calibration data to Banshee-44 to receive the Delicate Tomb catalyst. As easy as that. To masterwork it, you’ll need to wrack up some more kills by disintegrating several hundreds opponents, so buckle up and work your way through an overpopulated Lost Sector to unlock the full potential of this Exotic. Exotic catalysts typically require between 400-700 kills to be masterworked, with Guardian defeats providing more progress.

What does the Delicate Tomb catalyst do?

Called Ionic Interment, the catalyst allows the Exotic weapon to be partially reloaded whenever you pick up an Ionic Trace. Essentially, you’ll be able to wield this fusion rifle as a hip-firing cannon during Season of Plunder without having to worry about reloading.

While the lore entry isn’t too long, it is typically Destiny-esque with its strange story and a layer of mystery that vaguely hints at something. “Pour from one vessel to another” could be a reference to Clovis Bray and how he uploaded his mind into the giant Exo head on Europa or even Calus, who recently ascended to become a disciple of the Witness. With the introduction of the Strand subclass next year, several of the passages in this lore entry could also be referring to those new Darkness powers and how they manipulate life and death.

Read More: How To Get Delicate Tomb And Its Bugged Catalyst Quest In Destiny 2

« Microsoft's Pursuit Of Activision Was All About Mobile And PC, Phil Spencer Says