The best (and only) choice for a Dendro main DPS.

Tighnari has only been part of the Genshin Impact roster for about a day at this point, but realistically, he’s the only sensible choice if you’re looking for a Dendro main DPS in version 3.0. He’s a five-star bow user who uses Elemental Mastery, Dendro application, and charged shots to take out enemies. Here’s what you need to know about Tighnari’s best builds, abilities, artifacts, weapons, and team comps.

Tighnari tosses a Vijnana Stormheart in front of him that deals AoE Dendro damage while taunting enemies, causing them to enter the area of effect.

Using this skill will also decrease the charge time of Tighnari’s unique Wreath Arrow aimed shot by 2.4 seconds, which is why his Elemental Skill should be used before any charged shots are fired. This effect will end once the Vijnana Stormheart disappears, or after Tighnari fires three fully-charged shots.

Tighnari fires six Tanglevine Shaft arrows that track enemies and deal Dendro damage. On hit, these special arrows will spawn a new wave of Tanglevine Shafts that also home in on enemies.

Tighnari’s Keen Sight Talent increases his Elemental Mastery stat by 50 for four seconds after he fires a fully-charged Wreath Arrow. It’s a simple yet effective buff that can be triggered easily, especially after using his Elemental Skill.The Scholarly Blade Talent increases Tighnari’s charged attack and Elemental Burst damage by 0.06% for every point he has in Elemental Mastery. However, this damage bonus cannot exceed 60%.

Most of Tighnari’s damage output comes from Dendro elemental reactions, so it should come as no surprise that Elemental Mastery is an important stat when building him. The second most important stat is Crit Damage or Crit Rate depending on which one you need when looking at your existing substats. The ATK% stat is also a decent temporary substitute for the unlucky players out there when Elemental Mastery isn’t available.

Tighnari’s Energy Recharge stat is one that can be high or low depending on the team comp. If he’s used alongside characters like Kazuha or Fischl who generate a ton of Energy, Tighnari should be fine with about 130%-140% Energy Recharge. This is also true if he’s paired with another Dendro character like Collei or the Traveler. 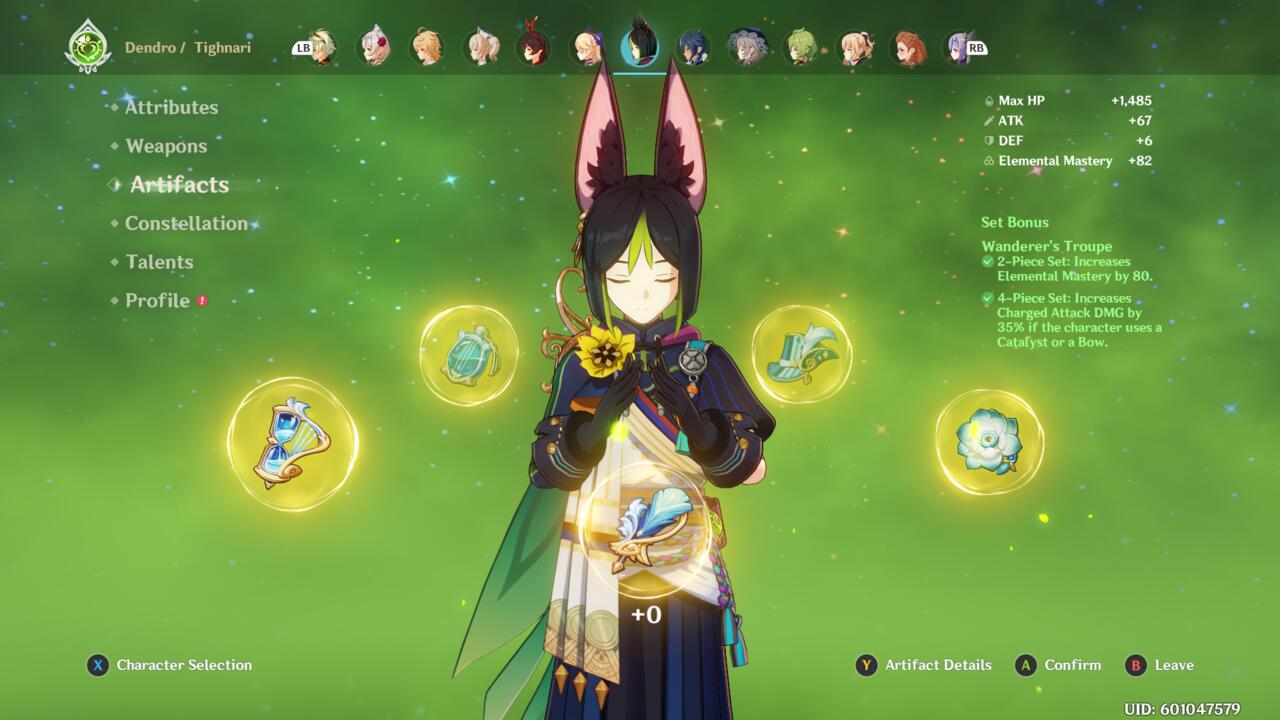 Two-Piece Set: Increases Elemental Mastery by 80Four-Piece Set: Within eight seconds of triggering an elemental reaction, the character equipping this will obtain buffs based on the elemental type of the other party members. ATK increases by 14% for every party member with the same elemental type as the user, and Elemental Mastery increases by 50 for every party member with a different elemental type. This effect only counts up to three other characters, and can only be triggered once every eight seconds. The effect can still be triggered when the user isn’t on the field.

Gilded Dreams is a brand-new artifact set that feels like it’s made just for Tighnari’s play style. It can potentially provide a major Elemental Mastery stat boost if your team comp is diverse. And that shouldn’t be a problem considering there are currently only two other Dendro options for teammates.

Tighnari works best with weapons that provide Crit Rate, Crit Damage, or ATK% since he’ll most likely have more than enough Elemental Mastery thanks to his abilities and artifacts. He has a number of good options to choose from, so we’ll list three below that will work for both free-to-play players and those who choose to spend a bit here and there. 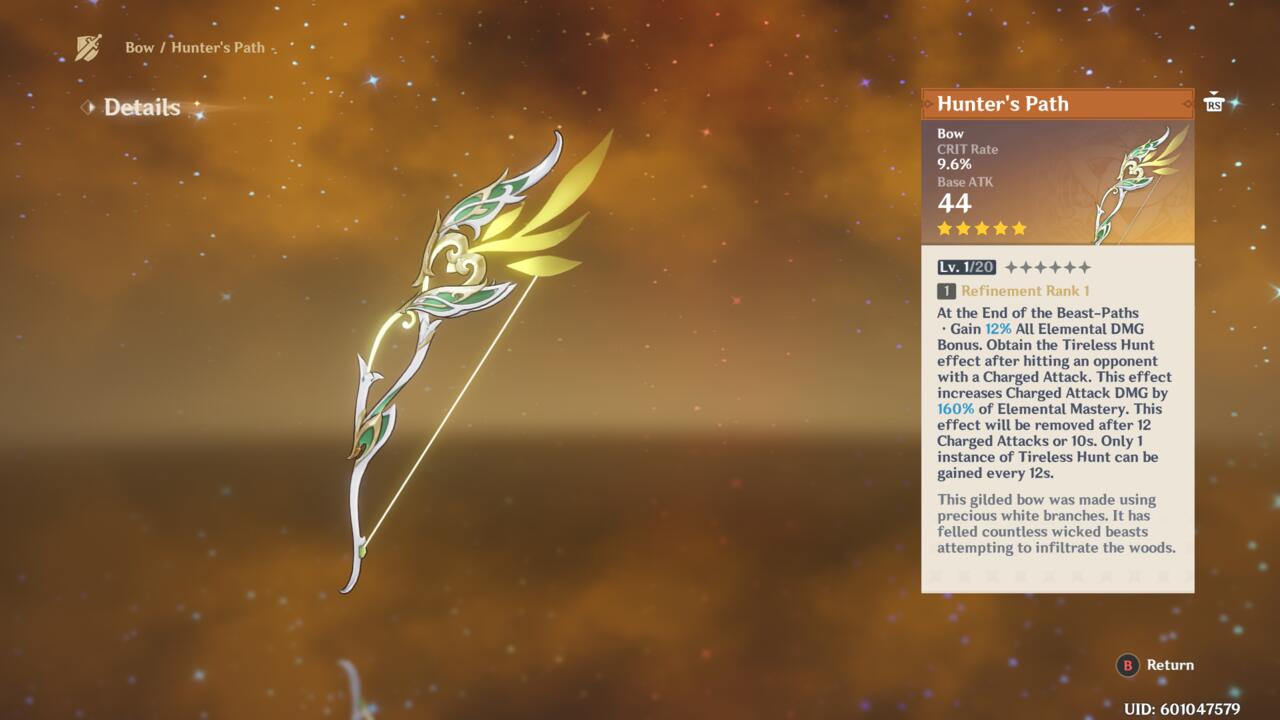 Main Stat: Crit RateEffect: Gain a 12/15/18/21/24% elemental damage bonus. After hitting an opponent with a charged attack, the user’s charged attack damage increases by 160/200/240/280/320% of Elemental Mastery. This effect ends after 12 charged attacks, or after 10 seconds pass. The effect can only be triggered once every 12 seconds.

Hunter’s Path is the new five-star bow that acts as Tighnari’s signature weapon. The Elemental Mastery and overall elemental damage bonuses compliment his kit perfectly, so this is the weapon you want if you’re willing to pull for it.

Main Stat: Crit RateEffect: If a normal attack or aimed shot hits an opponent within 0.3 seconds of being fired, damage is increased by 36/42/48/54/60%; otherwise, damage decreases by 10%.

Slingshot is a three-star bow that most players should have just from opening chests around the open world. It may not seem optimal, but the Crit Rate boost and extra damage can add up as long as Tighnari fires arrows from close range to avoid the 10% penalty.

The Prototype Crescent is a four-star bow that can be obtained for free through crafting at any blacksmith. Its effect requires you to hit weak points, but since Tighnari wants to use charged shots, aiming for those points shouldn’t be too difficult.

Tighnari works well in teams that resonate with Dendro elemental reactions. Pyro, Electro, and Hydro characters go well with Tighnari thanks to all of the reaction possibilities. With a high Elemental Mastery stat, Tighnari will deal incredible damage alongside other characters who rely on elemental damage, especially Fischl. Fischl can constantly cause Electro reactions and generate plenty of Energy, making her the best character to use with Tighnari.

However, keep in mind that Cryo, Anemo, and Geo don’t cause any reactions with Dendro, even though Anemo can be used to swirl the elements of other teammates. 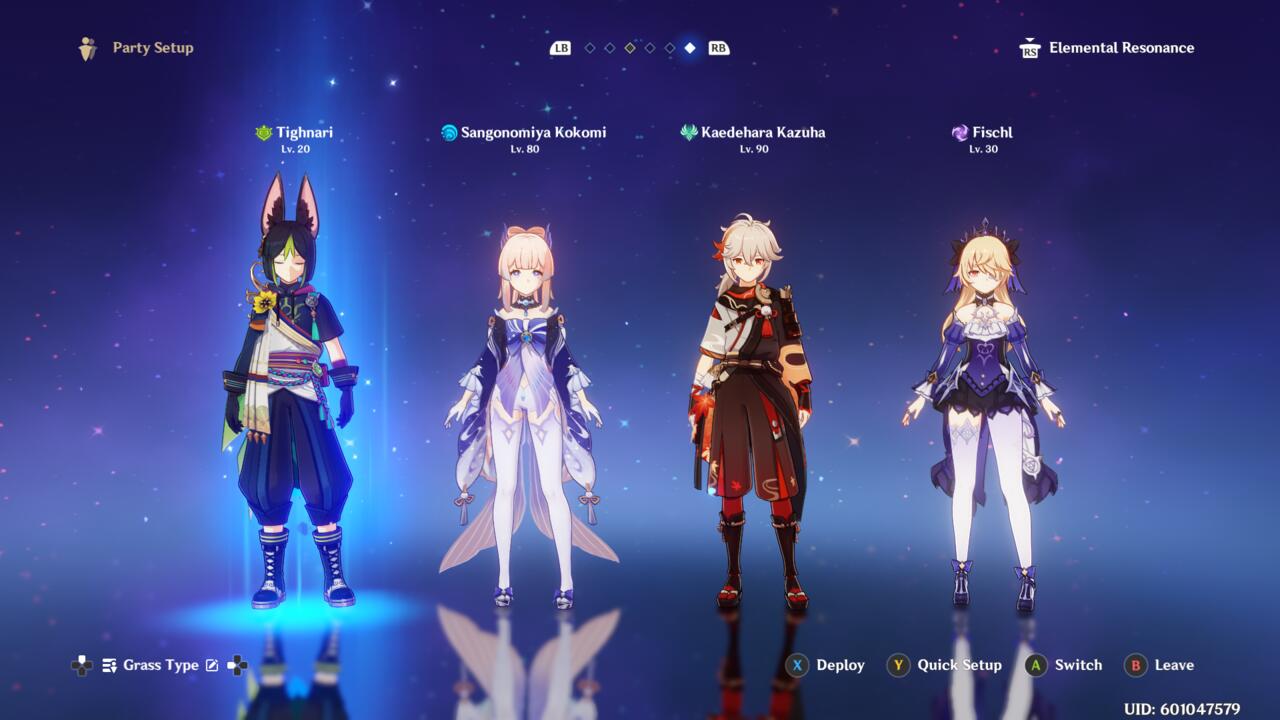 A team comp with Tighnari as the main DPS

Here are a few team comp examples for Tighnari:

Tighnari isn’t exactly a must-pull character, but he is the only option for those who want to build a team with a Dendro main DPS. Both Collei and the Traveler are better as supports, so Tighnari is currently in a unique situation in terms of the Dendro meta. Don’t worry about missing out on him though, as he’ll be added to the standard character banner in version 3.1.

« King Of Fighters Allstar Is Collaborating With Tekken 7