She’ll ensure your safe passage through the forest.

Collei is the newest four-star character in Genshin Impact, and she’s one of only three Dendro characters available in version 3.0. She’s a sub DPS who can currently be obtained for free, so every player should be able to get her right now. Here’s what you all need to know about how to build Collei, including info on her abilities, best artifacts, weapons, and team comps.

Collei throws out a Floral Ring boomerang that deals Dendro damage to every enemy that it hits, both on the way out and on the way back.

Collei throws out a doll named Cuilein-Anbar that looks and functions almost exactly like Amber’s Baron Bunny. Cuilein-Anbar will cause an explosion, dealing AoE Dendro damage.

After the explosion, the doll will dance around inside a newly-created zone to deal more AoE Dendro damage.

After the reaction, the party member will gain the Sprout effect once the boomerang returns. Sprout causes surrounding enemies to take Dendro damage equal to 40% of Collei’s ATK for three seconds. This is considered Elemental Skill damage, and the effect can’t be stacked.

The Languid Wood Talent extends the duration of the Cuilein-Anbar zone by one seconds every time a character inside it triggers a Dendro-related elemental reaction (same as the ones mentioned above). The zone can only be extended by three extra seconds.

Collei is mainly used to apply Dendro and enable Dendro reactions as a sub DPS and support. She won’t be dealing the most damage on your team, but she can make it so that other characters can take out enemies faster, as long as they have good Elemental Mastery. Collei’s first passive Talent scales off of her ATK stat, but if you’re using her for reactions at lower Constellations, Elemental Mastery is the stat to focus on when building her.

Collei can be built similarly to Tighnari since her main goal is to use her Elemental Skill and Elemental Burst, then leave the field until more Dendro is required. Her first Constellation even gives her 20% more Energy Recharge when she’s not on the field, and she never needs to use normal or charged attacks, as those will only waste time when rotating characters. 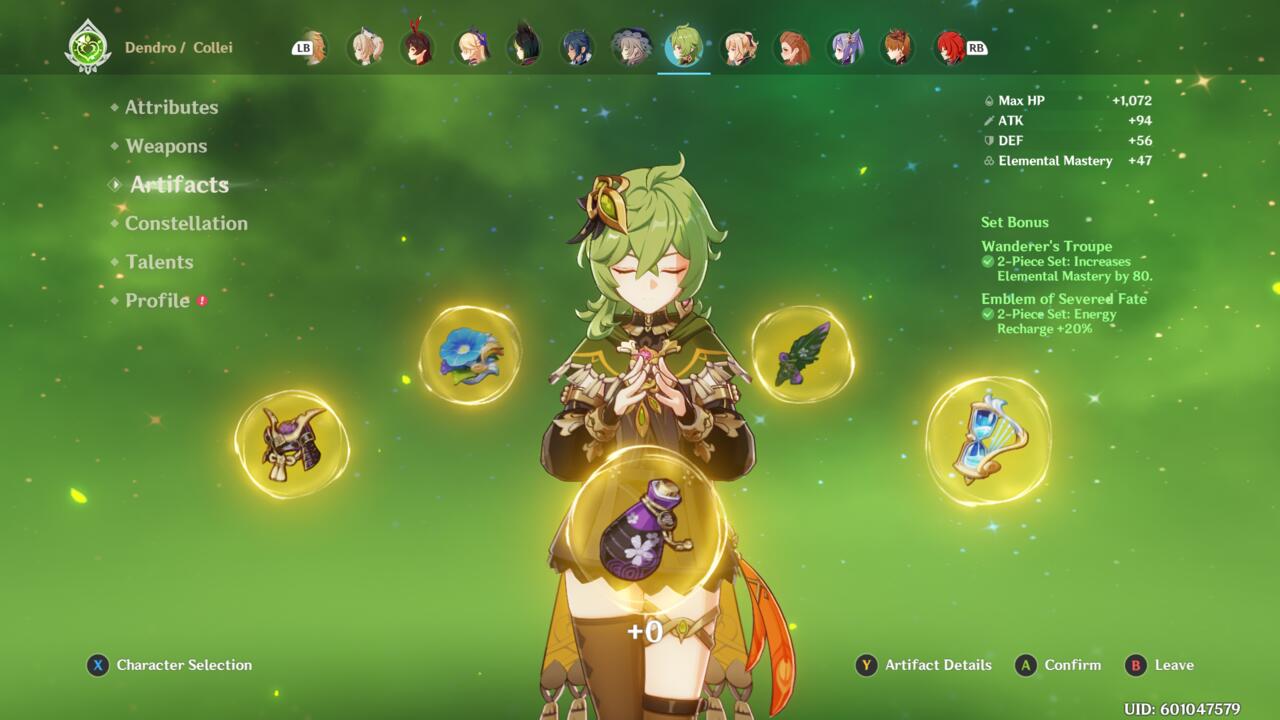 Two-Piece Set: Dendro damage bonus increased by 15%.Four-Piece Set: After an Elemental Skill or Elemental Burst hits an opponent, the target’s Dendro resistance decreases by 30% for eight seconds. This effect can be triggered even if the user isn’t on the field.

Deepwood Memories is a new artifact set that works well with Collei’s kit. Her cooldowns are quick, so she’s able to use both her Elemental Skill and Burst quite frequently, which will regularly reduce the enemy’s Dendro resistance. This is especially useful when paired with Tighnari since he’s a Dendro main DPS.

Two-Piece Set: Dendro damage bonus increased by 15%.Four-Piece Set: Increases Elemental Burst damage by 25% of Energy Recharge. A maximum of 75% bonus damage can be obtained through this effect.Emblem of Severed Fate is one of the most popular artifact sets in the entire game because it works for so many characters. We now know that it also works for Collei and her AoE Burst, especially if her Energy Recharge is high.

Collei’s best weapons provide Energy Recharge, Elemental Mastery, or ATK% boosts so that she can use her Burst more often or get higher numbers from her Elemental Burst and Skill. Here are three options that can be used by all kinds of players, whether the Collei build is free-to-play or has some money put into it. 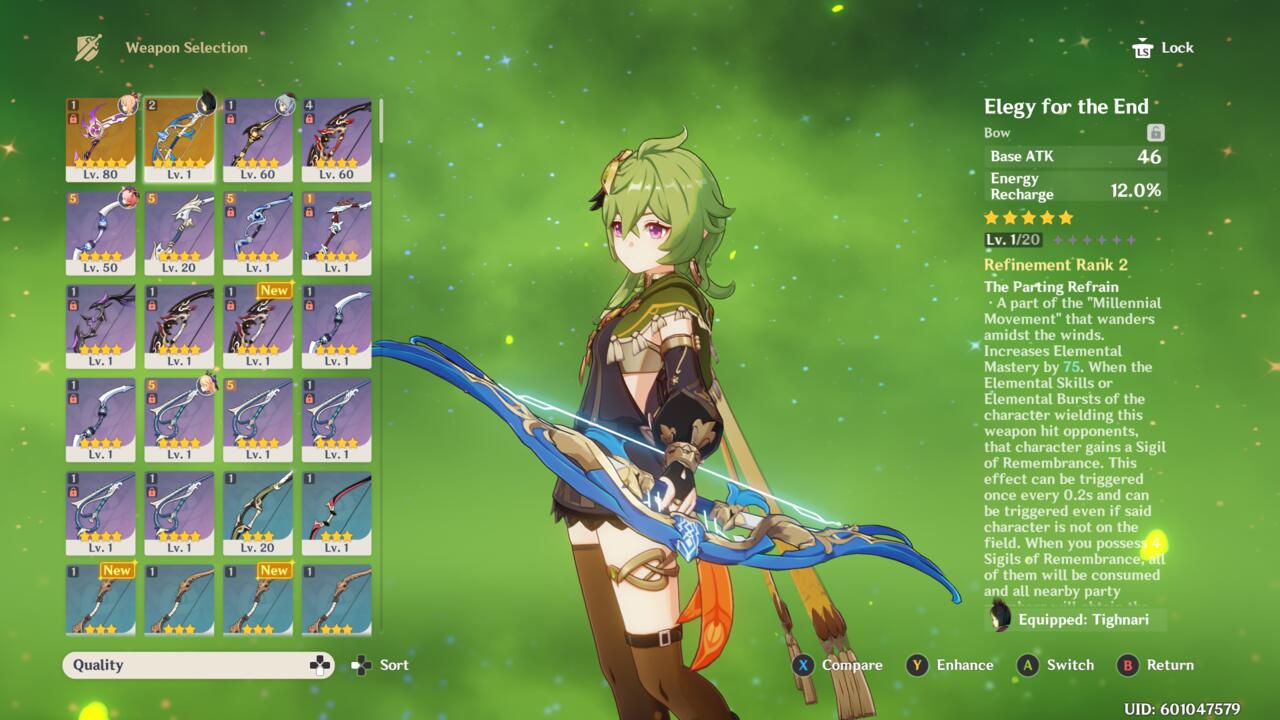 Main Stat: Energy RechargeEffect: Increases Elemental Mastery by 60/75/90/105/120. When the Elemental Skill or Elemental Burst of the wielder hits an opponent, the character gains a Sigil of Remembrance, providing an effect that can be triggered every 0.2 seconds whether the character is on the field or not. When four Sigils of Remembrance get stacked, they are automatically used to increase the party’s Elemental Mastery by 100/125/150/175/200, and also boost ATK by 20/25/30/35/40%. Sigils can’t be gained again for another 20 seconds after this effect occurs.

This five-star bow is perfect for a support Collei if you have an extra one lying around in your inventory. It provides significant buffs after Skills and Bursts, and since Collei has low cooldowns, the effect will trigger often.

The Stringless is a four-star bow that players can obtain with a bit of good luck on banner wishes. This effect is easier to follow, as it’s a direct damage increase to the two abilities that Collei uses all the time.

The Prototype Crescent is a four-star bow that’s free to craft at any blacksmith. The buff requires players to hit weak points, which isn’t ideal, but the ATK% bonus fits with Collei’s first Talent.

Collei should only be used as a support who does a moderate amount of extra damage alongside other characters who use elemental attacks to defeat enemies. She works well with Electro characters in particular because of how powerful Dendro and Electro reactions can be. 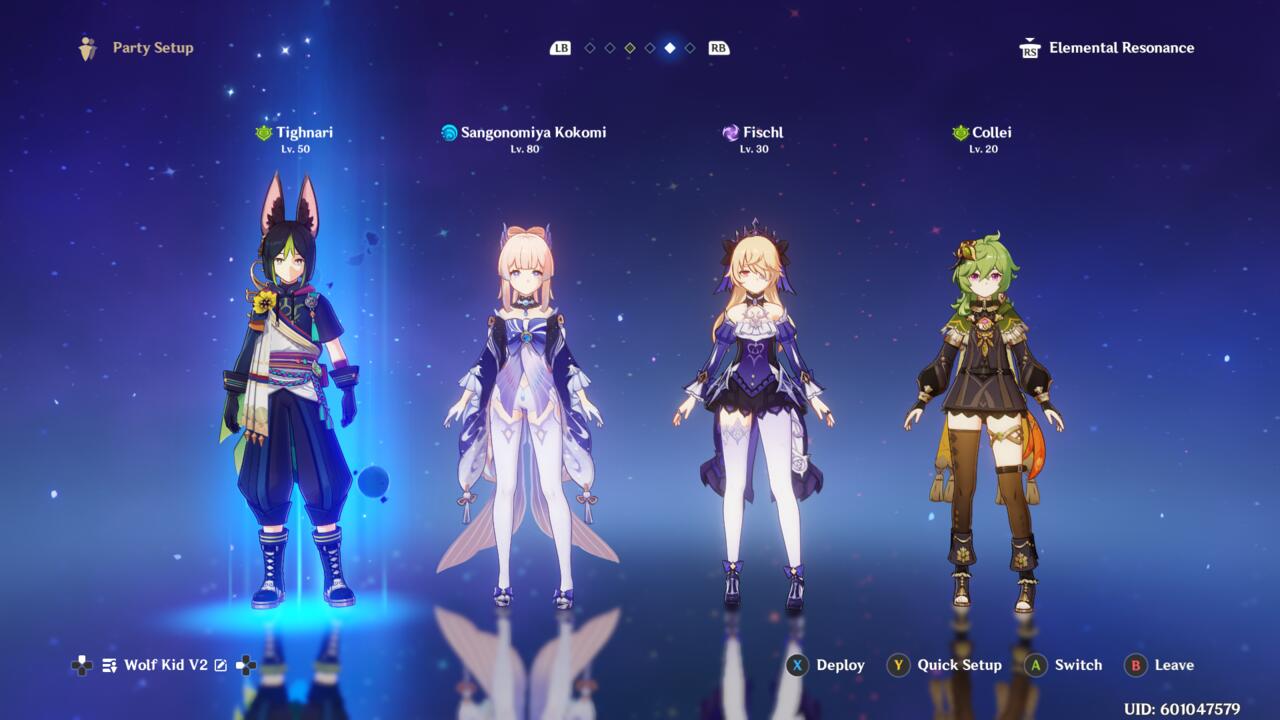 An example of a Collei Dendro Resonance team comp

Here are a few examples of Collei team comps:

Collei isn’t exactly the strongest character, but she’s free to add to your roster and is one of the few Dendro users currently available in the game. She’s worth building up as a budget Dendro sub DPS or support just because of how rare the element is at the moment, especially since Sumeru often provides opportunities to use Dendro for traversal, combat, and puzzles.