Destiny 2’s New Craftable Taipan-4FR Linear Fusion Rifle Is A Must-Have, Here’s How To Get It

With Destiny 2’s Season of the Plunder came loads of new weapons and gear to hunt for, but players have been eagerly seeking the new craftable Taipan-4FR Void Legendary linear fusion rifle that comes from a pretty straightforward quest. This quest isn’t part of the seasonal story, and it feels more like a review on how to craft weapons at the Enclave’s Relic. There’s a chance to get the red border Deepsight Taipan-4FR to drop from activities, but this quest guarantees that you’ll receive enough to be able to craft your own.

You don’t need to be a god roll enthusiast to see that Taipan-4FR has the potential to become a powerful Heavy weapon for PvE activities after upgrading its Weapon Level. Traits like Clown Cartridge and Firing Line become available at Weapon Level 10, and Triple Tap at level 8. Those traits make it strong, but Enhanced traits (better versions of the original traits) become available at the Relic at higher Weapon Levels. This linear fusion also has the Veist Stinger Origin trait, where damaging an enemy can reload the magazine and increase movement speed when aiming down sights. All of this is to say, being able to craft a linear fusion rifle with exactly the right perks–when it also has Veist Stinger–is something you shouldn’t skip.

First, head to the Enclave located on Mars through Savathun’s Throne World on the Destinations tab. The Relic Conduit in the weapon crafting area will have a blue quest marker. The Relic Conduit will give you an Ascendant Alloy Requisition quest and the Foundry Resonance quest for the linear fusion rifle. Accepting those quests will supply you with the Ammit AR2 Solar auto rifle with Deepsight Resonance. Use a Deepsight weapon to complete the first step of the quest.

Note: If you don’t see the Foundry Resonance quest at the Enclave, you may need to complete one of the earlier weapon crafting quests from Destiny 2: The Witch Queen.

Next, the Foundry Resonance quest says to complete a playlist activity. Hop into either the Vanguard Strike playlist, the Crucible, or Gambit to defeat combatants with a Deepsight weapon equipped. Completing step two will reward you with another Deepsight Ammit AR2.

Also, keep in mind that you can use any Deepsight weapon here; you don’t need to use the Ammit AR2 specifically. I used other Deepsight weapons along with the Ammit AR2 and Taipan-4FR throughout the quest. Some players, including myself, have experienced issues with the Triumphs section claiming that the Taipan-4FR hasn’t been unlocked for crafting. But if you complete all of the steps of this quest, you shouldn’t be prevented from doing so. 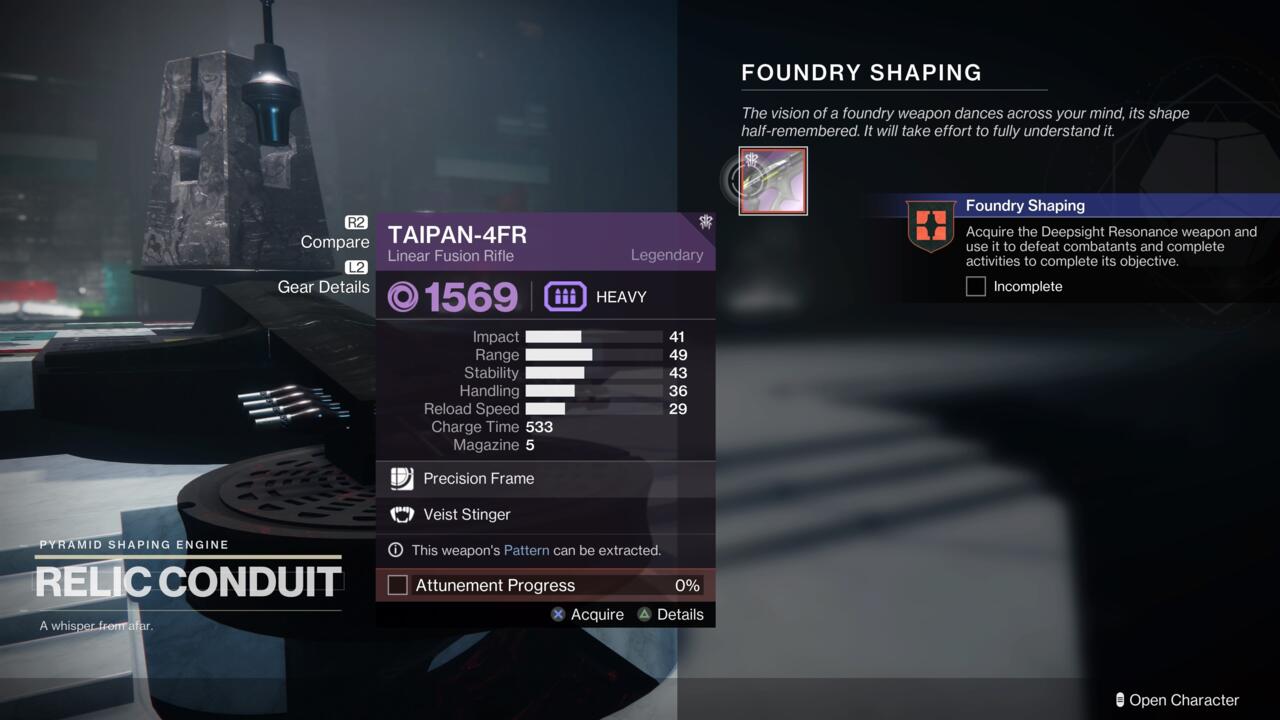 The first objective is to simply get the Deepsight Resonance weapon, defeat combatants, and complete its Attunement Progress. After that, head to either Dares of Eternity or Wellspring to complete the activity with a Deepsight weapon equipped. I jumped into Dares of Eternity to get a head start on upgrading my Taipan-4FR’s Attunement since the Heavy ammunition automatically refills when you have Starhorse’s Favor in the second and final encounters. Completing this step will drop another Deepsight Taipan-4FR.

Complete the Attunement Progress and extract the Resonant Elements for step three. Then, revisit the Relic in the Enclave for step four in the Foundry Shaping quest. At this point, if you’ve extracted the Resonant Elements of two Deepsight Taipan-4FRs or two Ammit AR2s, you should have those Weapon Patterns unlocked throughout the quest. As I mentioned earlier, although my Patterns and Catalyst tab showed these Weapon Patterns as incomplete, I was still able to craft them at the Enclave. 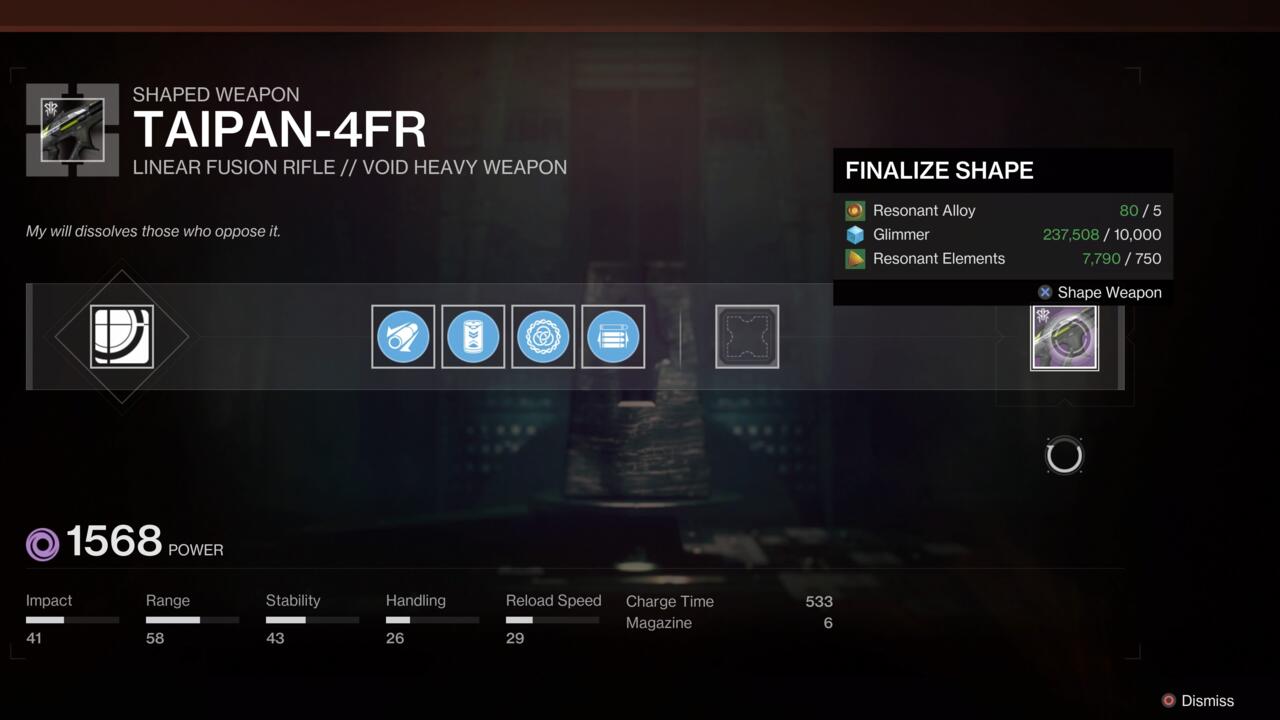 Taipan-4FR crafting screen at the Relic on Mars

Finally, for the fifth step, Shape your Taipan-4FR at the Relic. Crafting this weapon costs 5 Resonant Alloy, 10,000 Glimmer, and 750 Resonant Elements. When you craft this weapon, you’ll see that your Taipan-4FR starts at Weapon Level 1. As with any crafted weapon, you’ll want to use it as much as possible and have it equipped when completing activities to level it up quickly. That’ll ultimately allow you to swap in the aforementioned traits that you’ll really want, like Clown Cartridge and Firing Line.

Reach Weapon Level two by defeating enemies. Lastly, return to the Enclave one more time to grab the Ascendant Alloy reward to complete the quest.

Read More: Destiny 2’s New Craftable Taipan-4FR Linear Fusion Rifle Is A Must-Have, Here’s How To Get It