Handheld gaming PC manufacturer Aya Neo has released multiple truly impressive devices over the past year, including the Aya Neo Pro and Aya Neo Next, which has the best build quality of any handheld gaming device I’ve used. Aya Neo’s first couple forays into the market were slightly bigger and bulkier than the Switch OLED, and they already push the limits of what I see as a portable device from a practical standpoint–though they aren’t nearly as large as Valve’s Steam Deck. With handheld PC gaming growing more popular with the help of the Steam Deck, some prospective buyers may be looking for a device that packs power within a smaller shell.

That’s where the Aya Neo Air comes in. This new device from the prolific Chinese manufacturer offers a 5.5-inch OLED display and a compact form factor that, critically, still cares about ergonomics. Perhaps more importantly, prices for the Aya Neo Air start much lower than Aya Neo’s previous devices. Battery life is certainly an issue for demanding AAA games, but overall the Aya Neo Air is an excellent Windows handheld that is more suitable for daily commutes and traveling than the competition.

Like other Aya Neo products, the Air is available in multiple different specification profiles. I received the standard version that features an AMD Ryzen 5 5560U processor, 16GB of RAM, and a 512GB SSD. This particular model is available for $599 at the moment ($649 after early bird pricing ends). There’s a slightly cheaper option that comes with 256GB of storage and a $499 model dubbed the Lite that features 8GB of RAM and a 128GB SSD. Given the fact that having more than 8GB of RAM can be very useful for modern AAA gaming, I think opting for the 16GB version is the way to go here. And considering the minuscule price difference between the 256GB and 512GB storage models (roughly $20), going with double the storage is also a good path to take. That said, the Aya Neo Air is fitted with a microSD card slot, which is a first for the Aya Neo line thus far, so you can expand your storage rather cheaply just as you would with the Steam Deck. 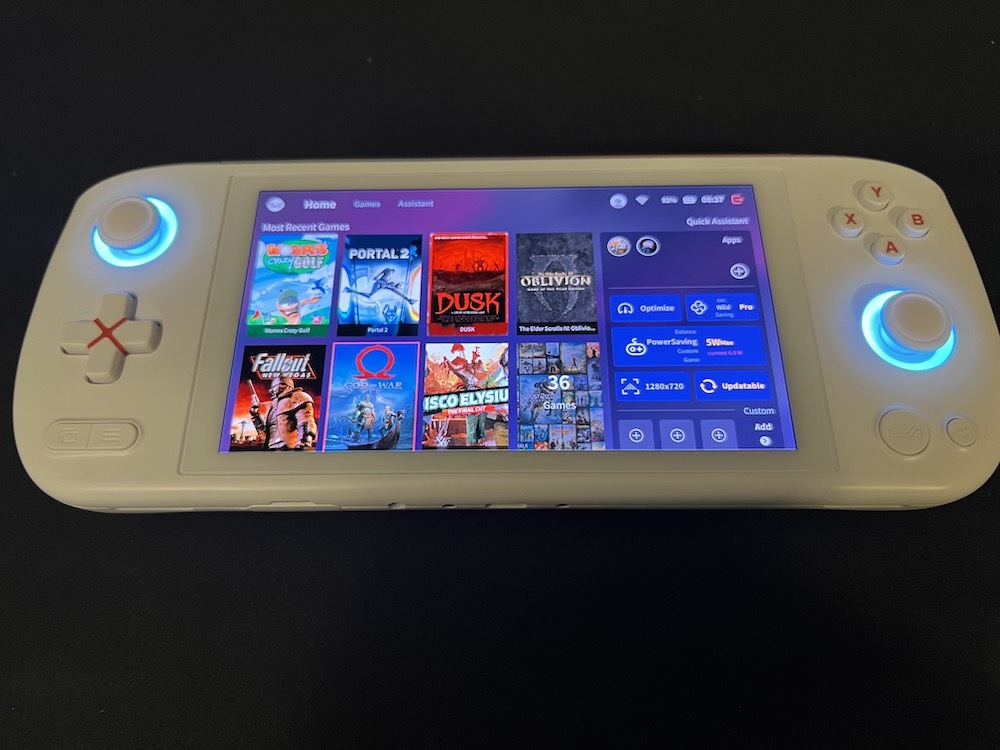 Aya Neo is also releasing a “Pro” version of the Air that features a faster 5825U processor and up to 32GB of RAM and 2TB of storage. Prices go all the way up to north of $1,200. Though I didn’t test a Pro model, the biggest jump outside of performance is likely to be battery life, which is the biggest knock on the standard model (more on that later).

From a design perspective, the Aya Neo Air is an incredible accomplishment. It can aptly be compared to the Nintendo Switch Lite in terms of size. But while the Switch Lite offers poor ergonomics, the Aya Neo Air is the most comfortable handheld I’ve used for gaming sessions of a few hours or more. With rounded edges and curved handles on the back of the device, the Air feels natural to hold. It’s lightweight at just 398 grams (0.87lbs), which is the same weight as the original Switch and significantly lighter than the Steam Deck and other Aya Neo models.

This great feel extends to all of the inputs. The offset analog sticks are high-quality and reminiscent of the original Aya Neo 2021 sticks. To add some eye-catching style, Aya Neo added LED rings around each joystick. The RGB lighting is programmable, so you can change the color patterns to your liking. The D-pad is excellent, and the face buttons, though a bit small, have a nice clicky feel to them. The standouts are the triggers, which adopt the Hall effect sensors featured in the Aya Neo Next. The triggers are wide and curved to comfortably rest your pointer fingers on. They have just the right amount of resistance. If you haven’t used Hall effect-sensing triggers, you’ll quickly be able to notice the difference. The basic premise here is that no internal components actually rub against each other when pressing them, which in turn creates a smoother pull and is intended to help durability.

A pair of good shoulder buttons are complemented by a stealthy pair of buttons that can be mapped to various functions. These buttons are actually built into the ends of the trim that runs between the shoulder buttons. A volume rocker is located next to the power button that features a fingerprint sensor (just like the Aya Neo Next). I found that the sensor worked as intended for logging into Windows. Aya Neo’s menu buttons have gotten better with each iteration on its devices, and the Air keeps a clean look with a pair of buttons on each side, including natural Start/Select buttons and the all-important Aya button that pulls up Aya Space, a nifty piece of software that makes using Aya Neo devices quite similar to consoles. 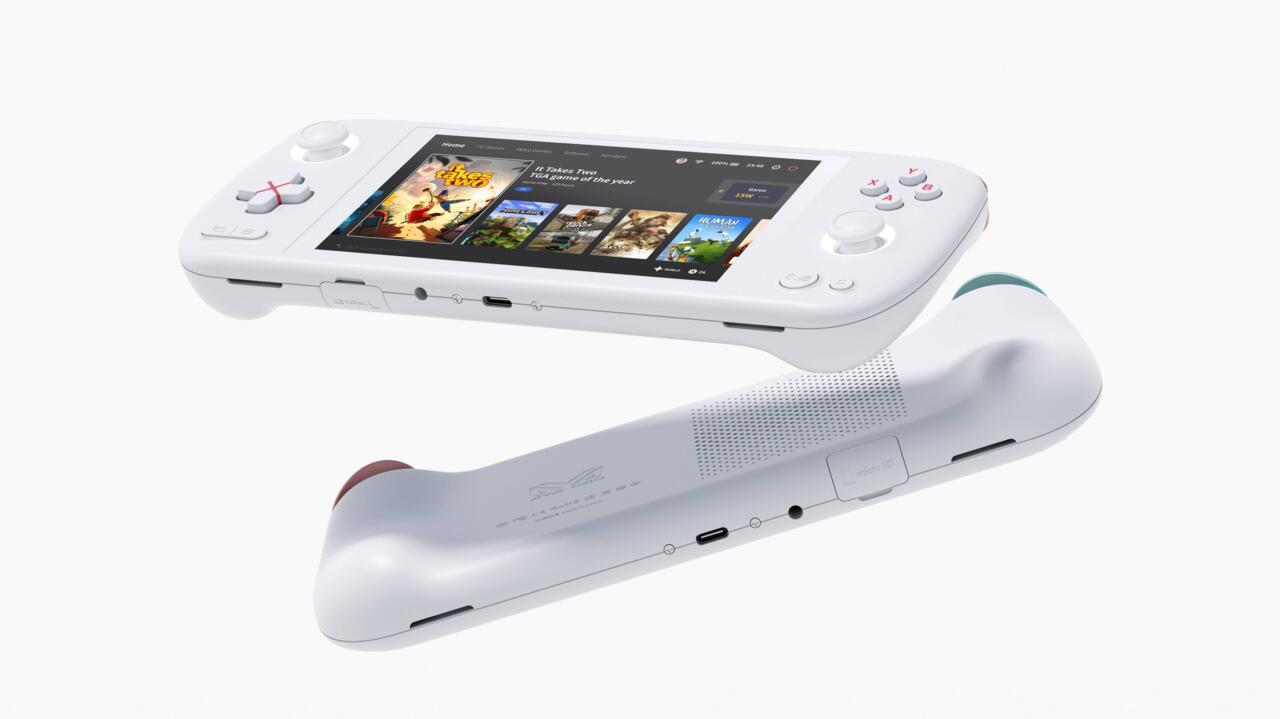 The Air has a pair of USB-C ports, one on top and another on the bottom next to a 3.5mm headphone jack. The microSD card slot is also located on the bottom and is covered by a retractable hatch that blends into the body.

When powered on, the Aya Neo Air is quite stunning thanks to the LED backlighting and the gorgeous OLED display. Even though some of its beauty is partially wasted on a 5.5-inch screen, this is undoubtedly Aya Neo’s best panel yet. By default, it displays at a full 1920 x 1080p resolution, offering vivid, bright colors and rich contrast. Navigating Windows on this small of a screen can be cumbersome at times, so I often plugged it into a monitor and connected a Bluetooth mouse/keyboard combo to download games.

In many ways, the Aya Neo Air feels like a compact Aya Neo Next, which is quite the feat considering it’s available for less than half the price. Thankfully, it’s not just a great device in the ergonomics and looks departments; the Air offers some seriously good performance in a small package.

The Aya Neo Air has enough power to run most modern games you throw at it, and many of the games I tested looked simply stunning on the Air’s OLED panel. Indie games and older AAA titles had no problem running at 60fps with high graphics settings. Newer AAA games often also look and run great on the Aya Neo Air.

If you want to play something like God of War or Marvel’s Spider-Man Remastered, you do have to make some concessions. Though I was able to get a smooth 30fps with those games as well as Forza Horizon 5, Ghostwire: Tokyo, and Halo Infinite, I was playing on low graphics settings. This is where the small display actually benefits performance, as the vibrancy of the OLED panel helps mitigate any annoyances that come with lower-quality textures.

As a Windows 11 PC, the Aya Neo Air gives you a lot of control over graphical settings and performance. Aya Neo makes it really simple to tweak with Aya Space, the proprietary software that comes pre-loaded. Aya Space is essentially a hub for all of your games from clients such as Steam, the Epic Games Store, GOG, etc. When you download a game, it typically automatically shows up in Aya Space as a tile with box art. You can load games straight from there. 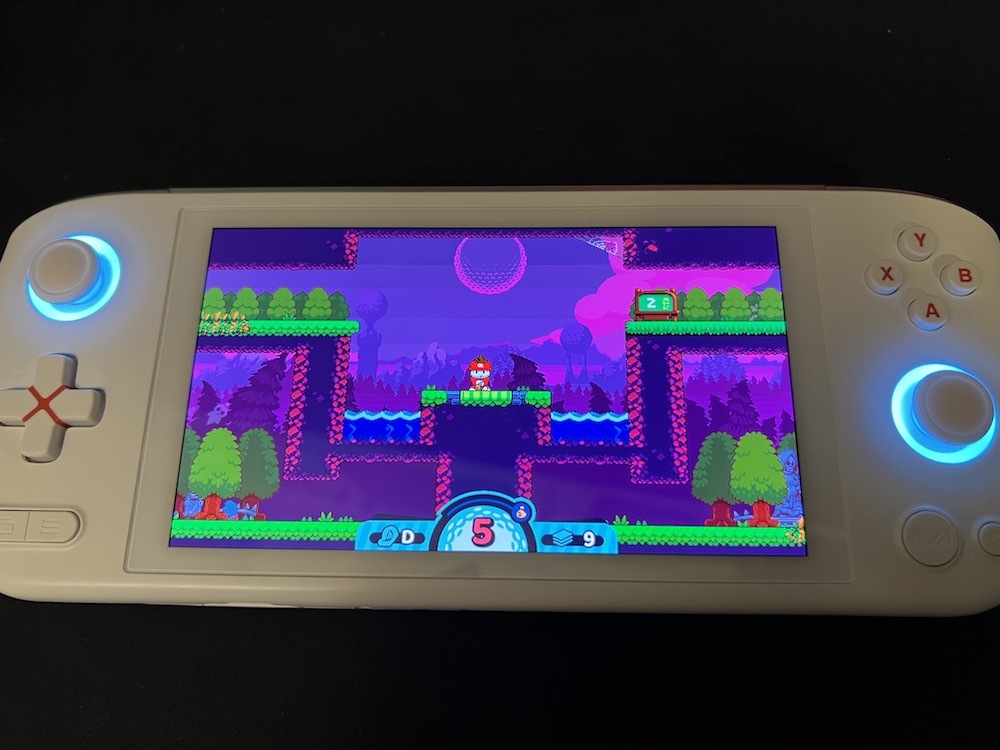 Cursed to Golf looks stunning on the OLED panel

Aya Space also lets you tweak settings on the fly, including resolution and TDP (thermal design power). You can also easily view PC stats such as RAM and CPU usage, fan speeds, and battery consumption. Tinkering with TDP and resolution is important to get optimal performance on the Air. When playing AAA games, especially demanding games, you want to crank up the TDP from the 8W standard setting to 12W. You can also bump the resolution down to 720p to conserve battery. Since the screen is small, the difference between 1080p and 720p is negligible, so I eventually played most games in 720p. Indie games and those that don’t require a lot of juice to run can benefit from turning the TDP down to 5W, which makes the internals work less aggressively.

Now for the bad news: The Aya Neo Air, in my testing, had a maximum battery life of just over three hours. However, you’re more likely to get two hours or less on average. And if you’re playing a AAA game like God of War? An hour is the most optimistic estimate at playable settings. This could be a big issue for some users, especially if you’re interested in it purely for AAA games. If you are buying it for indies and retro emulation, however, it may not be a huge deal–especially if you’re near an outlet.

To be fair, given the technical specs, form factor, and price of the Air model I tested, it’s not surprising battery life is an issue, as it only contains a 28Wh battery with a 7,350mAh capacity. That said, it’s still disappointing to only get an hour of battery life with demanding games when larger Aya Neo devices and the Steam Deck run for numerous hours between charges playing the same games. The Aya Neo Air Pro does have a larger 38Wh battery that will increase battery life, but we haven’t tested it to see how much better it actually is. Plus, the Pro model is significantly more expensive than the regular and Lite versions.

The Aya Neo Air can also easily be docked with a USB-C dock or hub (not included). This allows you to use it like a regular desktop PC with a monitor or TV. Performance while docked isn’t quite as good, but it still turns your handheld gaming PC into a conventional Windows 11 desktop with solid performance at 1080p resolution. Aya Neo sent a GuliKit Kingkong 2 Pro Controller from one of its third-party partners to test as well. This controller is very similar to Xbox controllers, but it’s designed for Switch, PC, and mobile devices. The sticks have Hall Effect sensors, so you don’t have to worry about stick drift. You probably already have a controller that you could use wirelessly for docked play with Bluetooth, but I’d highly recommend the Kingkong 2 if you’re in the market for a controller you can use on Switch or PC. It has a wonderful build quality, great sticks and triggers, and superb ergonomics. 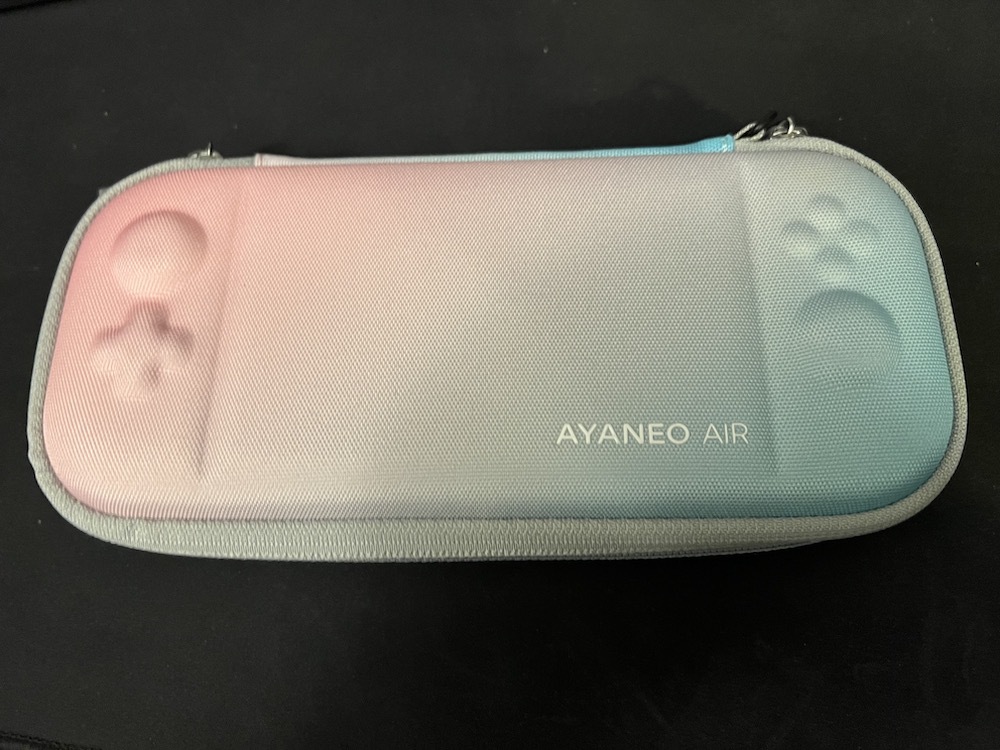 Still, the Aya Neo Air is primarily a portable device, so you’ll likely want to toss it in your backpack from time to time. Certain Switch Lite carrying cases will likely work with the Aya Neo Air, but you can also get a case specifically designed for the Air. Aya Neo partnered with carrying case manufacturer Tomtoc to create a sleek hardshell case for the Air. It’s the exact same style as Tomtoc’s Switch cases, which have long been some of the best options out there. If you get the Air, you should pair it with the Tomtoc case.

Even with the battery issue, the Aya Neo Air is more than just an interesting experiment. It’s an extremely well-made handheld gaming PC that punches far above its weight in terms of performance. And, for the first time in Aya Neo’ short but impressive history, the price is right here. The Aya Neo Air is available to order from Indiegogo with early bird pricing as low as $500.