Arcade1Up has revealed a Marvel vs. Capcom 2 home arcade cabinet, and fans won’t have to wait long to get their hands on it. Arcade1Up’s Marvel vs. Capcom 2 cabinet releases this fall, and you can sign up now for notifications on preorders, which will be available starting September 8. An exact release date hasn’t bee unveiled, but the cabinet will be available “a few weeks” after the preorder date.

Even though more than two decades have passed since its initial launch, people still play Marvel vs. Capcom 2 competitively. Though it won’t be at this weekend’s Evo 2022 tournament, it was a longtime fixture at the event, appearing in the lineup for nine straight years starting with Evo’s inaugural tournament in 2002. 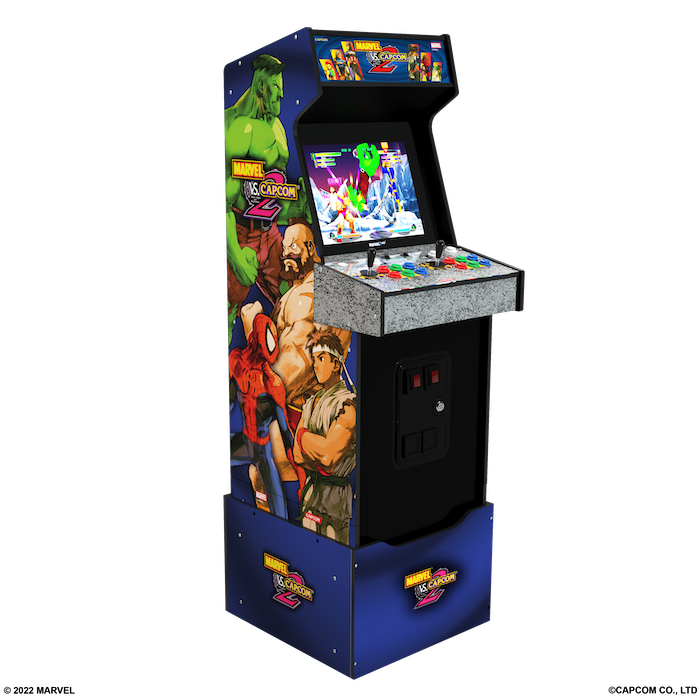 The Marvel vs. Capcom 2 competitive scene may even see a spike in interest due to the new cabinet and its support of Wi-Fi multiplayer. You can also play against a friend in local multiplayer, as there are two sets of sticks and buttons on the control panel. The cabinet will include the full lineup of 56 fighters.

Marvel vs. Capcom 2 is undoubtedly the most exciting aspect of the new cabinet, but as usual, the cabinet will be pre-loaded with a bunch of other games. Including Marvel vs. Capcom 2, the lineup features eight games, all eight of which support worldwide online multiplayer:

The five-foot cabinet (with riser) has brand-new Marvel vs. Capcom 2 art, a light-up marquee, and a 17-inch display. If you’ve never purchased an Arcade1Up cabinet, rest assured that they are very simple to assemble and disassemble, should you ever need to move the cabinet.

There’s also an Arcade1Up Marvel vs. Capcom gaming table, which comes with eight games. This one is still available, and right now you can get it for $300 off at Amazon and Best Buy.

« Best Buy Is Hosting A Massive Sale On Gaming, Tech, And Entertainment Products